Are you waiting for Season 4 part 2 of Stranger Things?  Why not pass the time with a book?  Last year we created a YA Friday booklist for fans of Stranger Things (https://wakelet.com/wake/qBUZCQfdv3aNVQXtfxIuA) but with a new season out this summer we thought we'd celebrate with ANOTHER booklist with even more readalikes.  Whether you want to dive into Stranger Things prequels, enjoy more 80s vibes, or experience another creepy haunting we have a book for you!

(AND if you're looking for a place to enjoy your new reads check-out our books and hammocks event!  This laid back program for teens is an opportunity to chill out with a snack and make space to read) 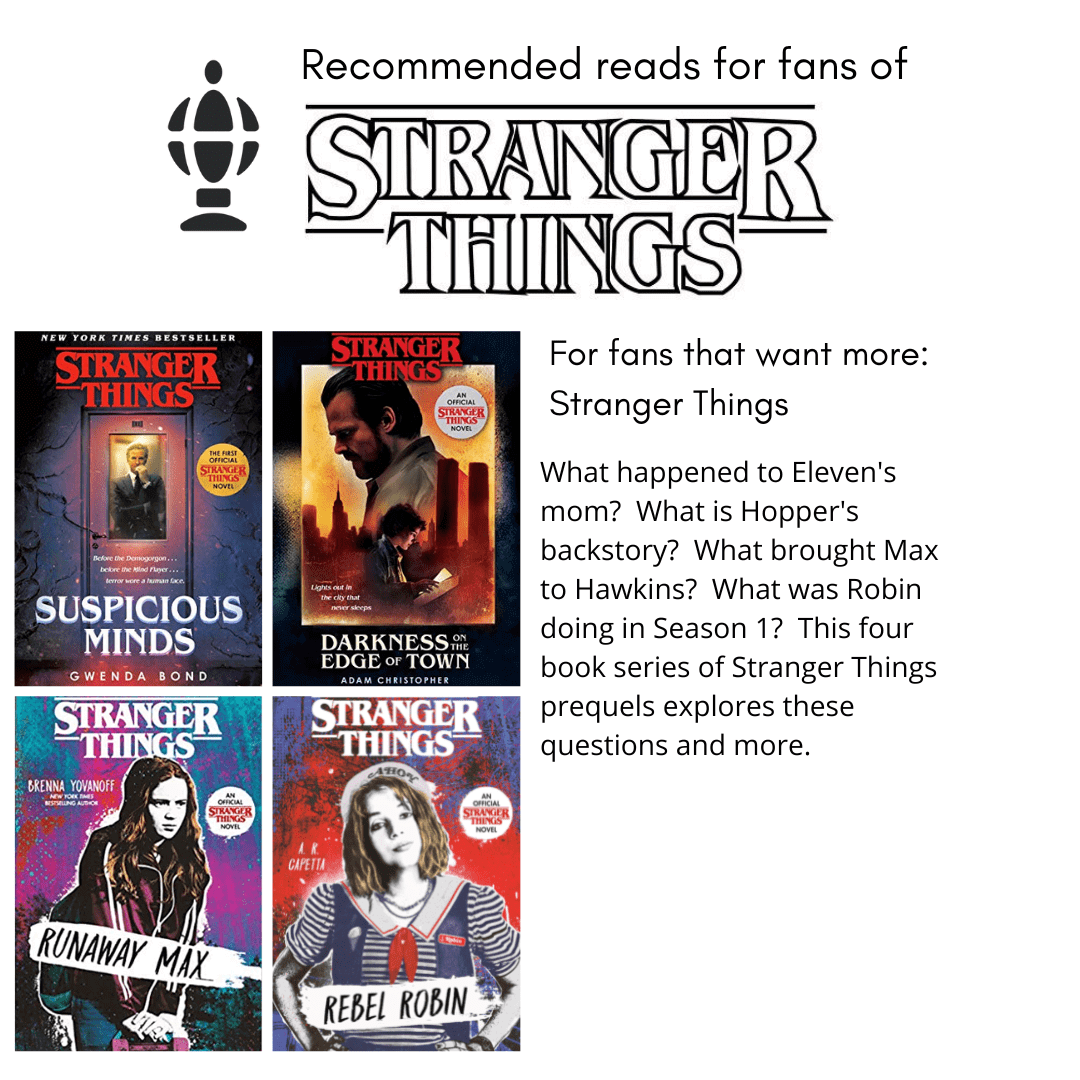 What happened to Eleven's mom? What is Hopper's backstory? What brought Max to Hawkins? What was Robin doing in Season 1? This four book series of Stranger Things prequels explores these questions and more. 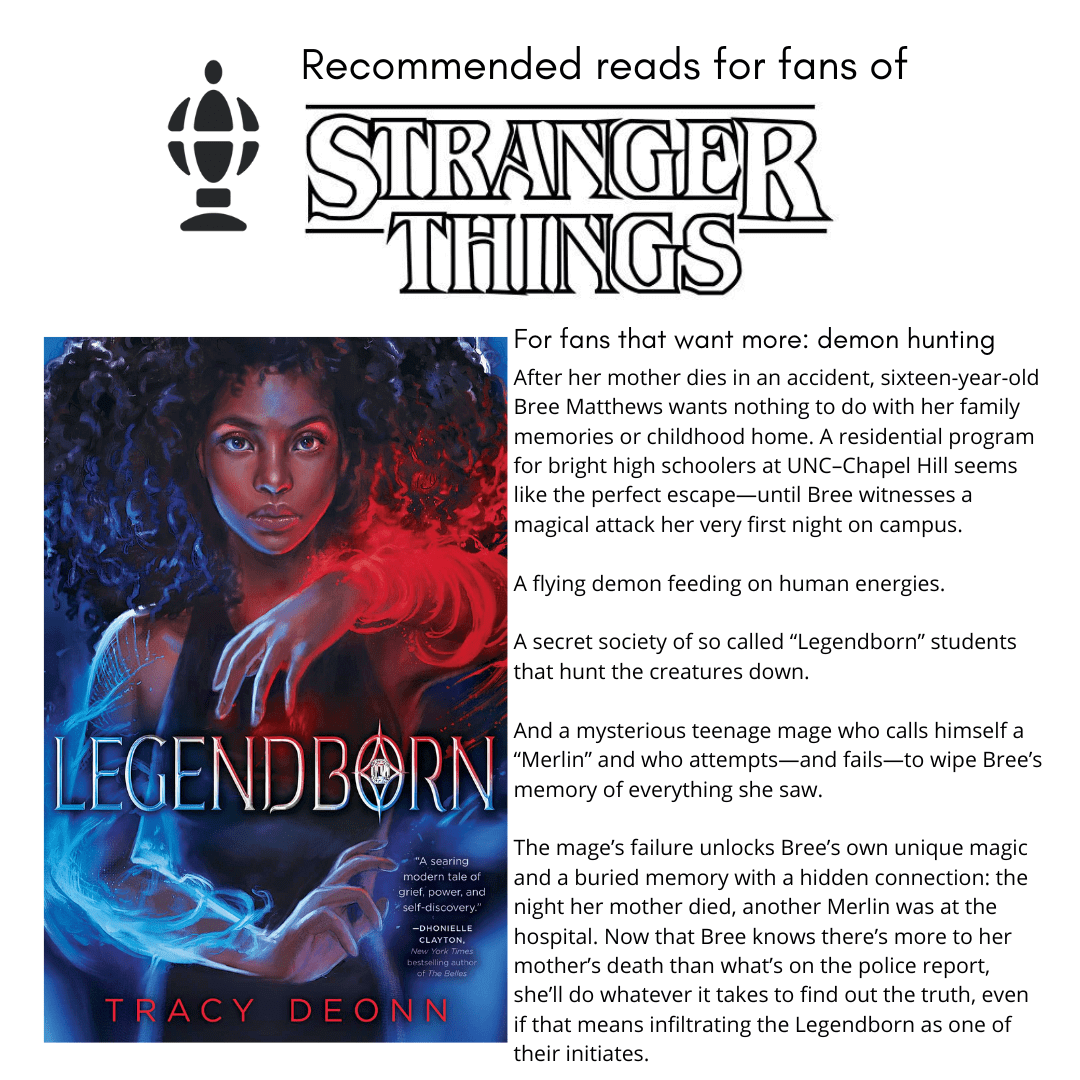 After her mother dies in an accident, sixteen-year-old Bree Matthews wants nothing to do with her family memories or childhood home. A residential program for bright high schoolers at UNC–Chapel Hill seems like the perfect escape—until Bree witnesses a magical attack her very first night on campus.
A flying demon feeding on human energies.
A secret society of so called “Legendborn” students that hunt the creatures down.
And a mysterious teenage mage who calls himself a “Merlin” and who attempts—and fails—to wipe Bree’s memory of everything she saw.
The mage’s failure unlocks Bree’s own unique magic and a buried memory with a hidden connection: the night her mother died, another Merlin was at the hospital. Now that Bree knows there’s more to her mother’s death than what’s on the police report, she’ll do whatever it takes to find out the truth, even if that means infiltrating the Legendborn as one of their initiates. 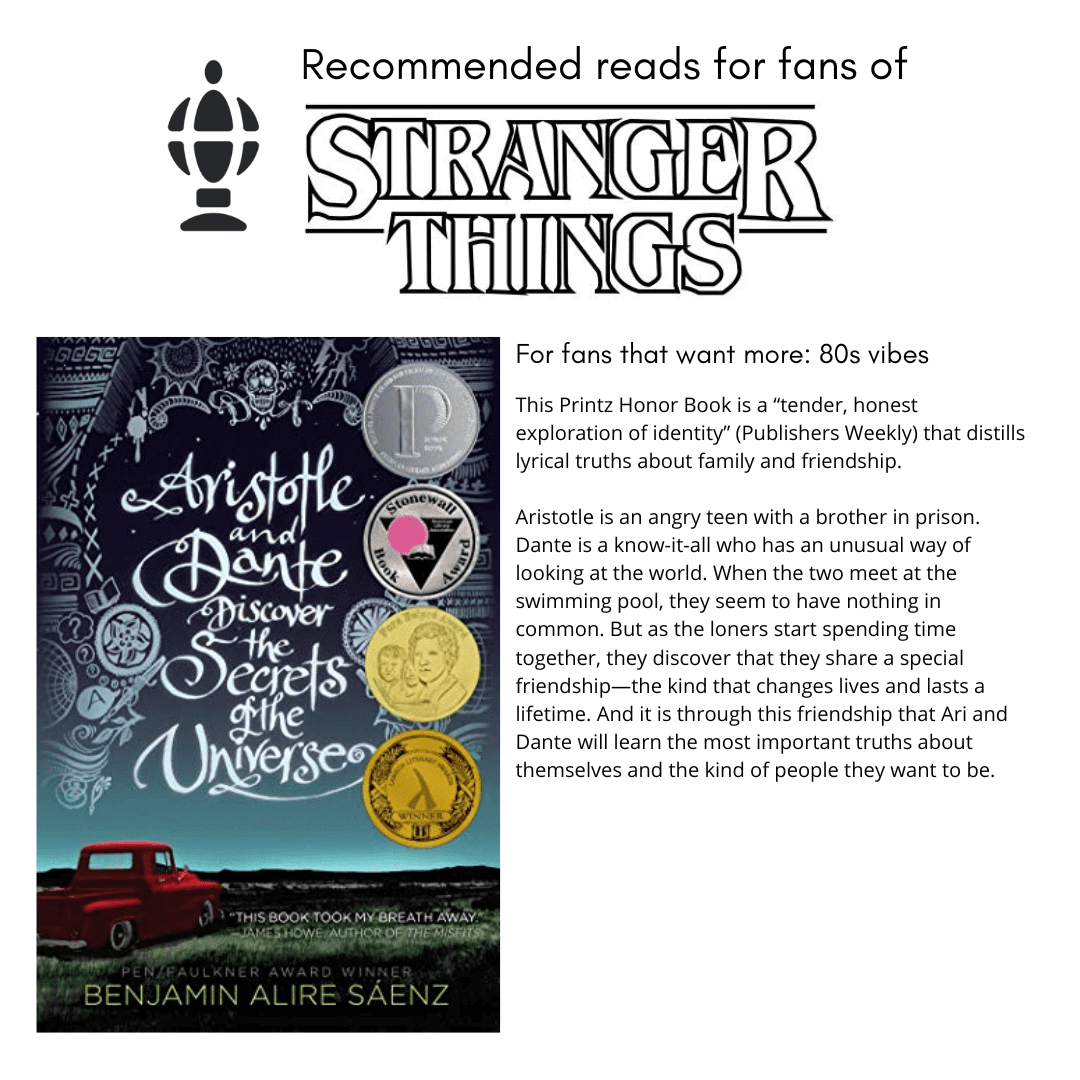 For fans that want more: 80s vibes Aristotle and Dante Discover the Secrets of the Universe

This Printz Honor Book is a “tender, honest exploration of identity” (Publishers Weekly) that distills lyrical truths about family and friendship.
Aristotle is an angry teen with a brother in prison. Dante is a know-it-all who has an unusual way of looking at the world. When the two meet at the swimming pool, they seem to have nothing in common. But as the loners start spending time together, they discover that they share a special friendship—the kind that changes lives and lasts a lifetime. And it is through this friendship that Ari and Dante will learn the most important truths about themselves and the kind of people they want to be. 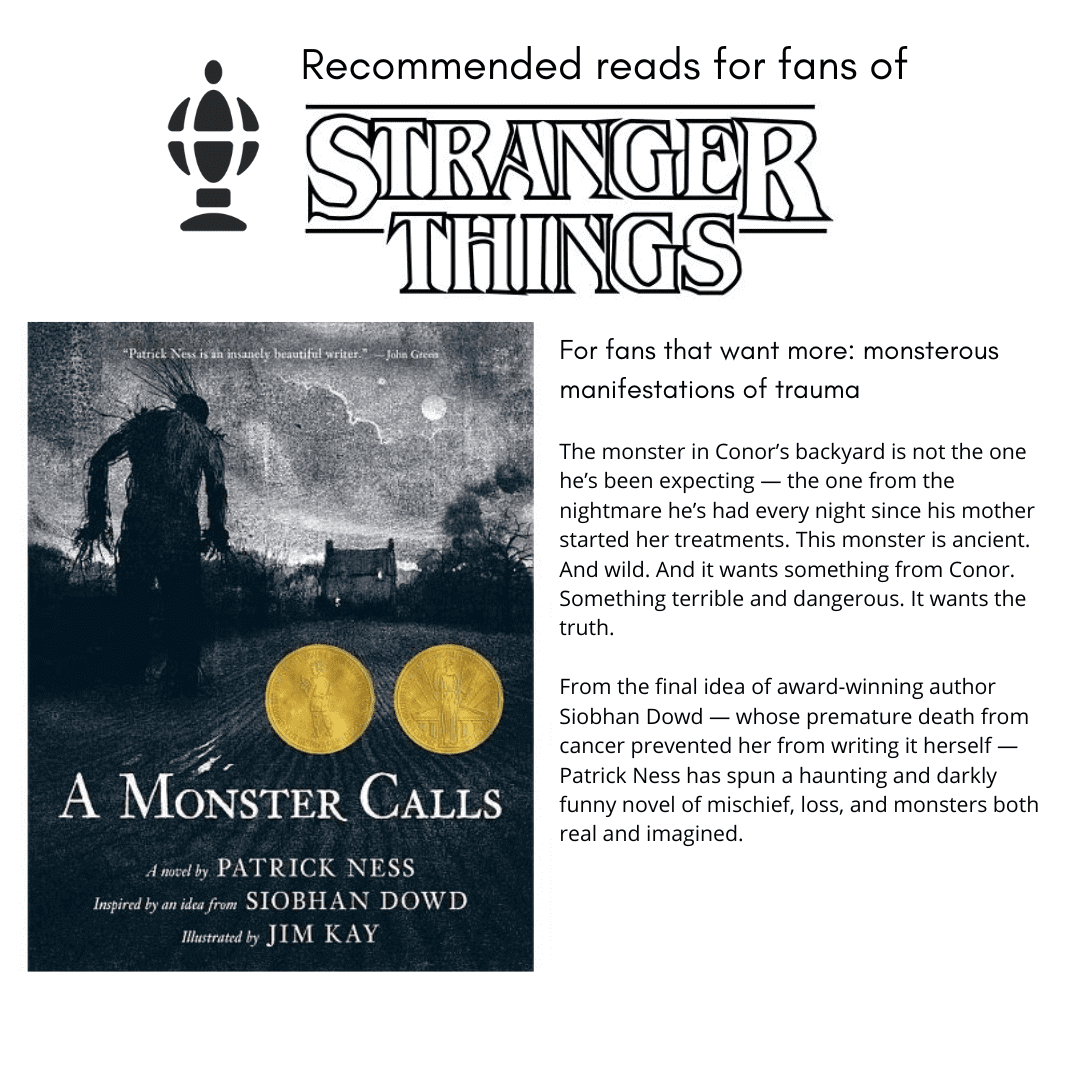 For fans that want more: monstrous manifestations of trauma A Monster Calls

The monster in Conor’s backyard is not the one he’s been expecting — the one from the nightmare he’s had every night since his mother started her treatments. This monster is ancient. And wild. And it wants something from Conor. Something terrible and dangerous. It wants the truth.
From the final idea of award-winning author Siobhan Dowd — whose premature death from cancer prevented her from writing it herself — Patrick Ness has spun a haunting and darkly funny novel of mischief, loss, and monsters both real and imagined. 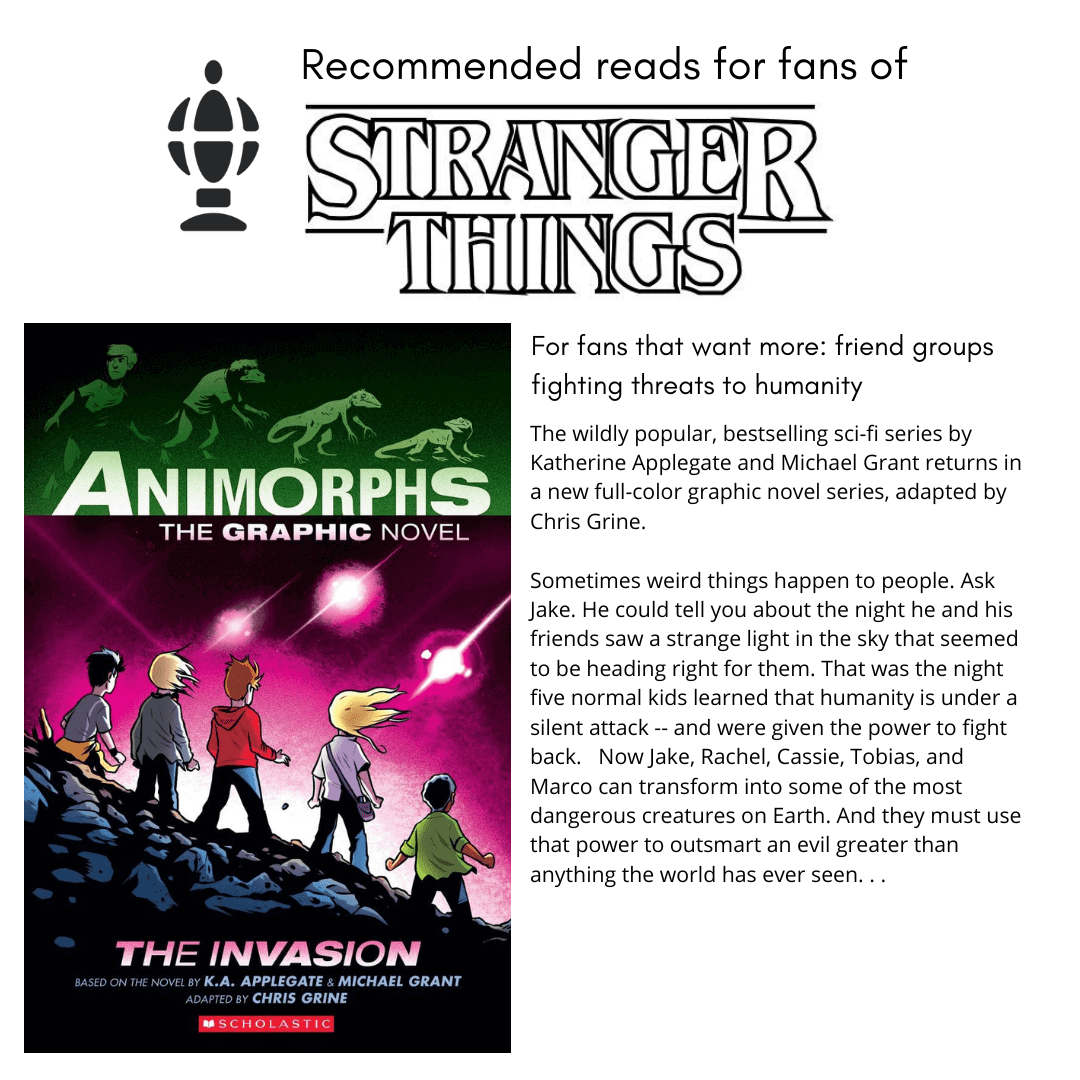 The wildly popular, bestselling sci-fi series by Katherine Applegate and Michael Grant returns in a new full-color graphic novel series, adapted by Chris Grine.
Sometimes weird things happen to people. Ask Jake. He could tell you about the night he and his friends saw a strange light in the sky that seemed to be heading right for them. That was the night five normal kids learned that humanity is under a silent attack -- and were given the power to fight back. Now Jake, Rachel, Cassie, Tobias, and Marco can transform into some of the most dangerous creatures on Earth. And they must use that power to outsmart an evil greater than anything the world has ever seen. . . 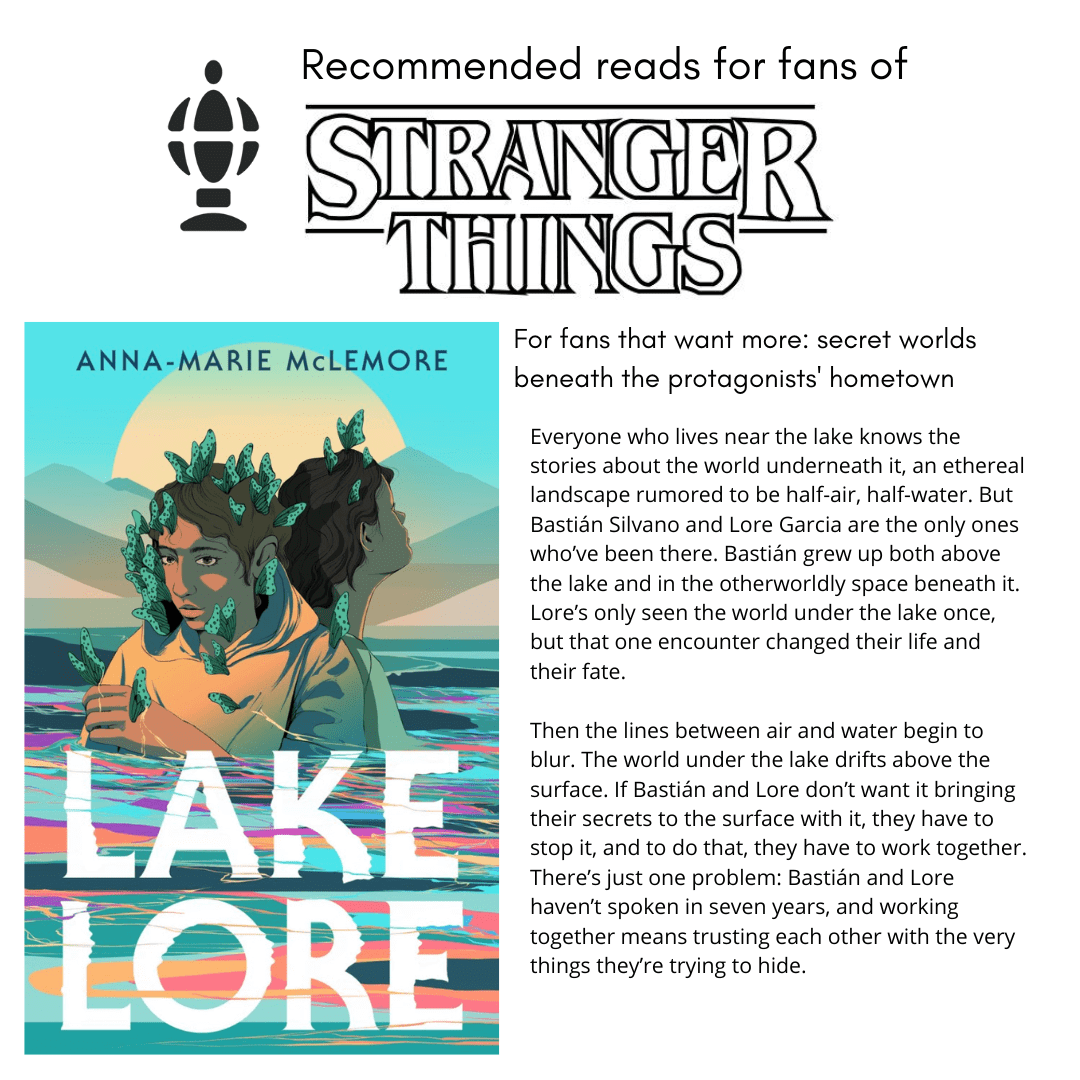 For fans that want more: secret worlds beneath the protagonists' hometown Lake Lore

Everyone who lives near the lake knows the stories about the world underneath it, an ethereal landscape rumored to be half-air, half-water. But Bastián Silvano and Lore Garcia are the only ones who’ve been there. Bastián grew up both above the lake and in the otherworldly space beneath it. Lore’s only seen the world under the lake once, but that one encounter changed their life and their fate.
Then the lines between air and water begin to blur. The world under the lake drifts above the surface. If Bastián and Lore don’t want it bringing their secrets to the surface with it, they have to stop it, and to do that, they have to work together. There’s just one problem: Bastián and Lore haven’t spoken in seven years, and working together means trusting each other with the very things they’re trying to hide. 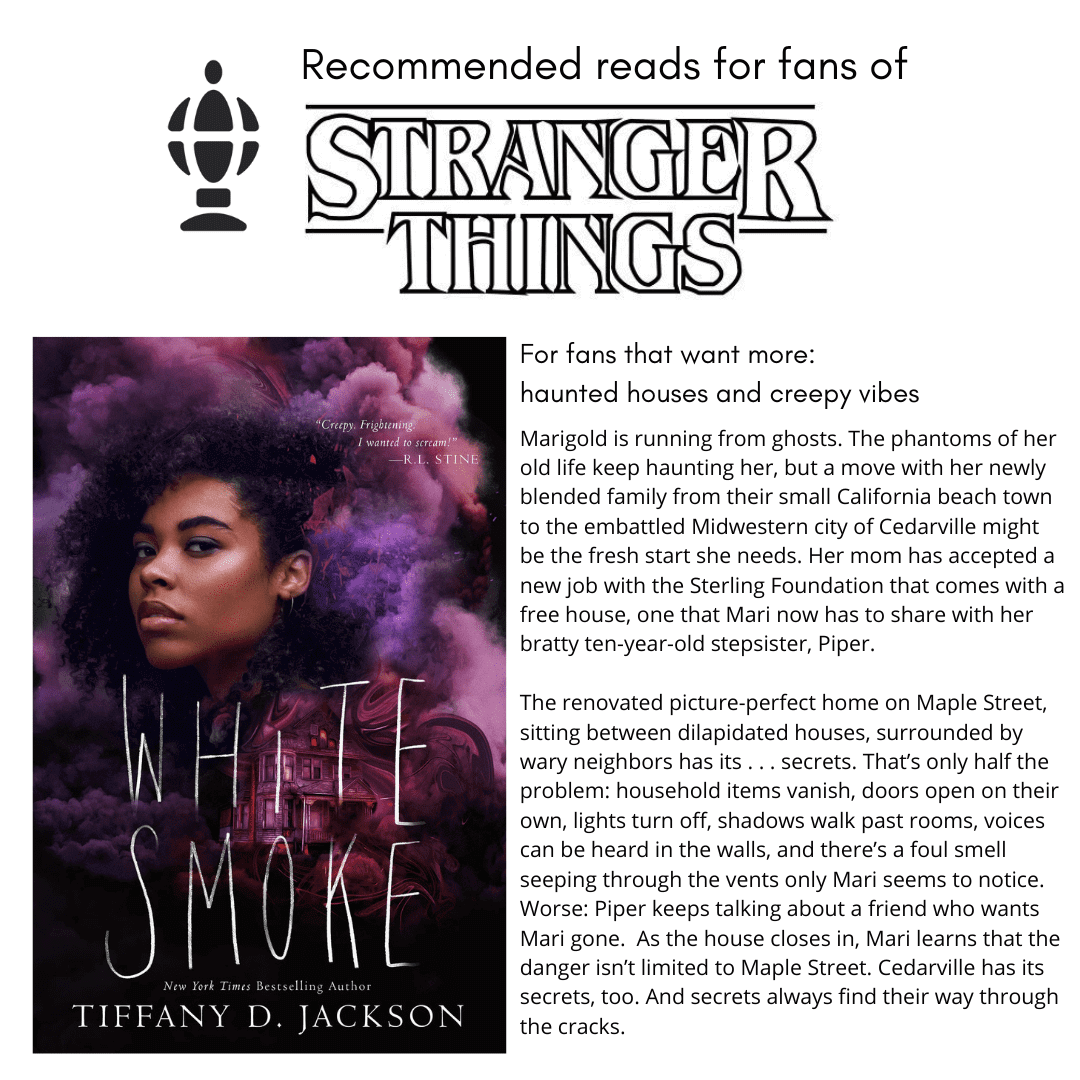 Marigold is running from ghosts. The phantoms of her old life keep haunting her, but a move with her newly blended family from their small California beach town to the embattled Midwestern city of Cedarville might be the fresh start she needs. Her mom has accepted a new job with the Sterling Foundation that comes with a free house, one that Mari now has to share with her bratty ten-year-old stepsister, Piper.
The renovated picture-perfect home on Maple Street, sitting between dilapidated houses, surrounded by wary neighbors has its . . . secrets. That’s only half the problem: household items vanish, doors open on their own, lights turn off, shadows walk past rooms, voices can be heard in the walls, and there’s a foul smell seeping through the vents only Mari seems to notice. Worse: Piper keeps talking about a friend who wants Mari gone. As the house closes in, Mari learns that the danger isn’t limited to Maple Street. Cedarville has its secrets, too. And secrets always find their way through the cracks.