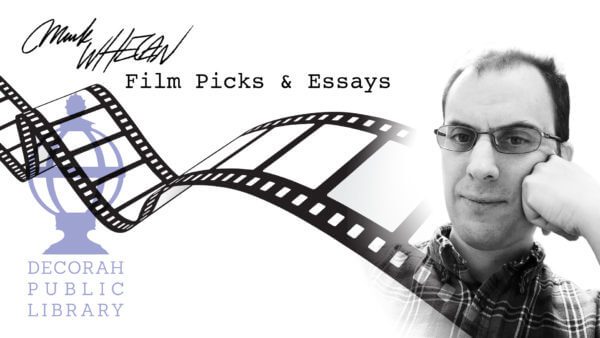 In the earlier part of the 1990s, when video cassettes finally became available for circulation at the Decorah Public Library, it was a modest assortment mostly comprised of NOVA educational features. They were safely stashed behind the circulation desk and fitted with clamshell cases. This preceded any computer cataloging system, therefore obtainability of films was viewable via crudely assembled three-ring binder that enclosed the needed title information and a plastic green card that you were to bring to the circulation desk in exchange for the favored video cassette.

We did not appreciate an extensive checkout duration at the time (a maximum of two titles per patron and a few days checkout period as opposed to the current three-week length we currently employ) but it was an impressive and promising onset to transforming our humble library into a multimedia provider.

For years, the library has offered quality titles regardless of medium, in a timely manner. However, as motion pictures are concerned, this was not always the case as most of the titles in our collection were donated.

Thanks to technological advancements, ample budgeting, and overall demand, what began as a novel but limited collection of VHS cassettes has, collectively, bloomed into almost three-thousand DVDs and Blu-Rays—nearly six-hundred of which have been inducted the past year. From contemporary to classic, blockbuster to indie, our library has become host to some of the greatest films of all time: Casablanca, Citizen Kane, Rashomon, and Battleship Potemkin just to name a few.

With internet streaming services becoming more routine, providing a quality assortment of physical media is a challenge in of itself. This is especially accurate considering the window of opportunity between theatrical release and private home distribution has aggressively narrowed over the last decade. What once took years to enjoy in the family living room is now readily available in a few short months—sometimes, though uncommon, a title is issued for home viewing simultaneously with its theatrical delivery.

The following films are an eclectic hodgepodge of newly inaugurated titles that I consider highlights of the 2018 calendar year. It is an honor and privilege to provide the public with the art of motion pictures and I am grateful for our vast, diverse, and ongoing assemblage of cinema and television that our community will experience for years to come.