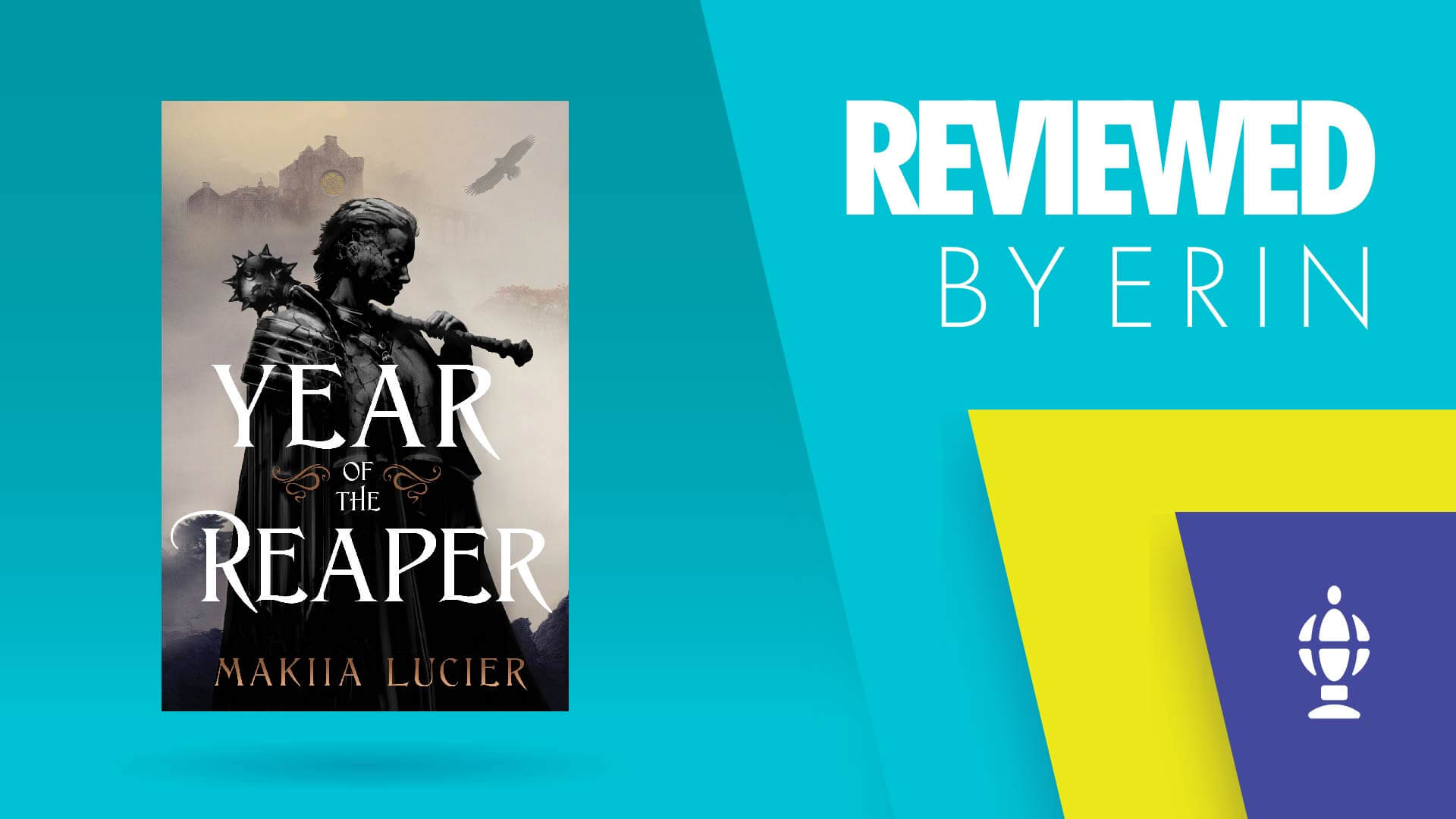 Year of the Reaper

I received an ARC of Year of the Reaper from Clarion Books in exchange for an honest review.

I didn’t know what to expect from Year of the Reaper. I had never read anything by Makiia Lucier before, but I am always eager to find out what an unfamiliar author has to offer, and it was difficult to resist the lure of that hypnotic cover. I was delighted to discover that it is an exceptionally excellent book, so excellent that it ranks among the best books I read this year.

Year of the Reaper has the supreme misfortune of being published a week before Steven Erikson’s new Malazan novel, The God Is Not Willing, releases in the US—and while that is also an exceptionally excellent book, it is coming from a titan in the fantasy community, and I hope it doesn’t overshadow Year of the Reaper. This standalone YA fantasy is a satisfying mystery and an intimate character study wrapped in a fully-realized world; I was startled by how much I loved it, and I can’t wait to read everything Lucier writes. Don’t miss this gem of a novel.

Year of the Reaper concerns Lord Cassiapeus, or “Cas,” who is returning home in the wake of a devastating plague after three years of imprisonment in a foreign kingdom. Peace has finally settled after a princess from the kingdom which imprisoned Cas married the king of his own. But his home is not as he left it—the king and queen are staying with Cas’ brother Ventillas, and on the day of his arrival, Cas saves the queen’s newborn child from an attempted assassination.

You’ll be able to guess the identity of the assassin fairly quickly thanks to clues smartly laid down by Lucier, but this is a story where “why” is much more interesting than “who.” I was deeply satisfied by the progression of and resolution to the mystery plotline; it captures the nuances of relationships and trauma, and the stakes strike an elegant balance between the micro/personal and the macro/political. Characters do things in this book that have ramifications for entire kingdoms, but there are no mustache-twirling villains or heroes charging gloriously into battle. These are people motivated by love, lust, fear, greed, loyalty, and heartbreak—they are not fighting to save or destroy the world, they are fighting to find their place in it.

The heart of this book, though, belongs to Cas; he is one of the most refreshing fantasy characters I’ve read in ages, and Year of the Reaper is first and foremost the story of how he reckons with the trauma of his imprisonment and reacclimates to a home which no longer feels like home. The scope of the story is relatively small, but it feels big because Lucier so effectively invests you in Cas and the characters around him. The cast is surprisingly robust for a standalone fantasy, and the rate at which you will be introduced to new characters can feel overwhelming at times—on the other hand, no character feels extraneous or underdeveloped. The roles they play in the story may not be large, but they provide the world with a sense of density and texture.

I don’t want to spoil the specifics, but there are three scenes in this book which will stay with me for a long time: one in which a character destroys a representation of their own legacy, one in which a character’s sexuality is slowly and subtly revealed (without ever being explicitly stated in the text), and one in which a character gets a haircut. All three scenes exhibit remarkable grace and tenderness, with an attentiveness to the intricacies of character few authors can muster. You may be familiar with Howard Hawks’ definition of a good movie—three great scenes, no bad ones. Turns out it works for books, too, and Year of the Reaper embodies those criteria.

I don’t have any major criticisms. The ending feels just a tad rushed and a touch too saccharine for my taste, but that’s an inconsequence nitpick in light of how dang good this book is. Lucier’s prose is crisp and clean, evocative without becoming overly lush, and her storytelling is firing on all cylinders here. This is one of those rare novels that reminds you how good books can be; I want to run up to random people on the street, shove it into their hands, and say, “Read this.”