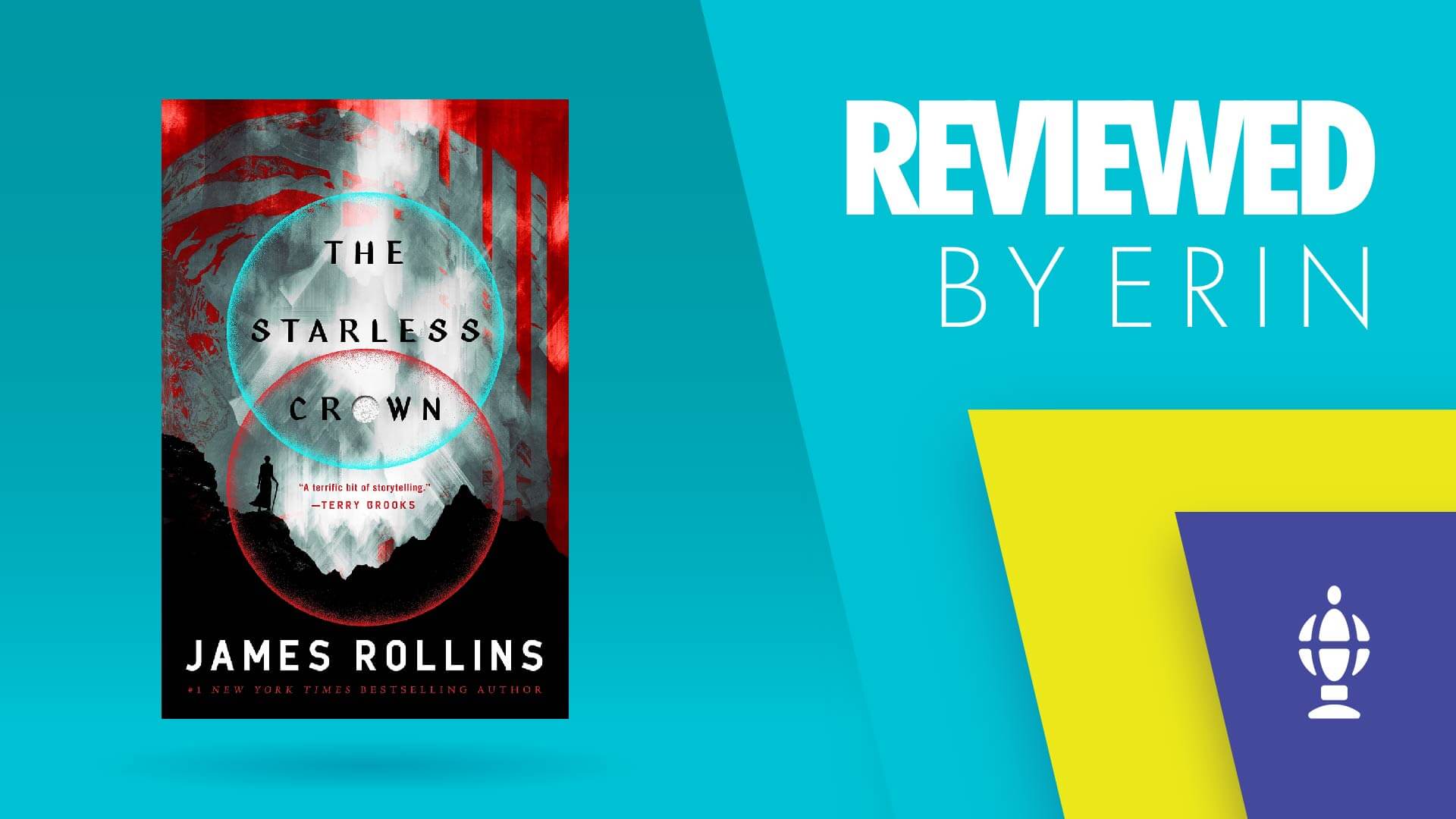 I received an ARC of The Starless Crown from Macmillan-Tor/Forge in exchange for an honest review.

James Rollins is best known as a writer of thrillers, but The Starless Crown is far from his first foray into fantasy: he previously wrote The Banned and the Banished series and the (currently unfinished) Godslayer Chronicles under the name James Clemens. I have been patiently waiting for the third book in the latter series since Hinterland was published in 2006 (I’m not being sarcastic when I say “patiently”—there have been more than enough good books to keep me occupied in the meantime), and while The Starless Crown didn’t quite capture my heart the way Godslayer Chronicles did, reading a Rollins/Clemens fantasy again scratched an itch that hasn’t been scratched in sixteen years. He doesn’t write quite like anyone else in the genre.

The Starless Crown takes place far in the future, on a tidally locked Earth—or “Urth,” as the characters in the book call it: the planet perpetually faces the sun on one side and away from the sun on the other side, leaving a habitable zone between. The primary protagonist of The Starless Crown is Nyx, a near-blind girl who finds herself at the heart of a dark prophecy. Rollins layers in a surprising number of secondary protagonists as the novel goes on, including prince Kanthe, thief Rhaif, knight Graylin, and several other POV characters (Kanthe’s older brother, Mikaen, pops off the page as a deliciously compelling antagonist—more of him in the sequel, please!).

I was so engrossed in the first half of this book. I eagerly sank my teeth into every new character, and I was tantalized by every hint of the delightfully wicked world inhabited by these characters. Rollins’ writing has flavors of Anthony Ryan, George R.R. Martin, and Ian C. Esslemont: there is strong sense of physicality that anchors me in the fictional world, and that’s important to me as a reader. I like the visceral nature of his prose. But Rollins’ most interesting quality as a fantasy writer is that even when he’s writing fantasy, he’s not writing fantasy—he’s still writing thrillers. The Godslayer Chronicles are structural thrillers dressed up in fantasy clothes, and The Starless Crown is no different. This time, though, that quality hurts the story rather than helps.

Unfortunately, The Starless Crown falls prey to the thing I always dread in genre storytelling: it gets so caught up in action sequences that it forgets about the characters. The second half of this book is almost nonstop thrills, and that’s not a compliment—the personalities that made the characters so distinctive and memorable in the first half of the book simply fade away until they are nothing more than names on a page, names who have nothing unique to contribute during the climatic sequence. After spending hundreds of pages with these people, I suddenly found myself stopping to decipher who was who because they had all blended into an indistinguishable beige background behind Nyx (who loses her most interesting quality as a character early on).

That’s the first of two lesser frustrations I had with The Starless Crown: it introduces a disabled protagonist and then cures them of their disability without stopping to consider what that means, either to this specific character in this specific world or as a part of the real-world storytelling tropes surrounding disability (as a disabled person myself and someone who studied disability in college, it’s a bit of a sore spot for me). It’s lazy, dishonest, irrelevant to the story, and worst of all, a boring cliché. My other annoyance is with Rollins’ insistence on replacing the letter “i” with the letter “y” at every avaylable opportunyty (presumably to make the words ynvolved seem more archayc and exotyc and fantastycal). Look, I lyke the letter “y.” Y’d probably rank it in my top ten Englysh letters. Yt can be a vowel or a consonant! But when yt comes crashyng ynto words lyke the Kool-Ayd man, yt becomes chyldysh and dystractyng rather than flavorful and ymmersyve. (Y’m exaggeratyng for comedyc effect, but come on, let me have my fun.)

The Starless Crown is a decent book. It’s fun! The writing is good. The worldbuilding is full of rich detail—Rollins excels in this arena—and I desperately want to know more about how the Earth we know became the fantasy landscape portrayed in these pages. I will certainly be picking up the sequel. But I still feel like I ate a bag of potato chips: it was yummy, but far from filling—“empty calories,” as they say. Characters are like fire: they burn brighter when they have some oxygen. Hopefully the next book will give us a bit more to chew on by lightening the action and allowing those characters room to breathe. If they have that, I expect they’ll burn brightly.