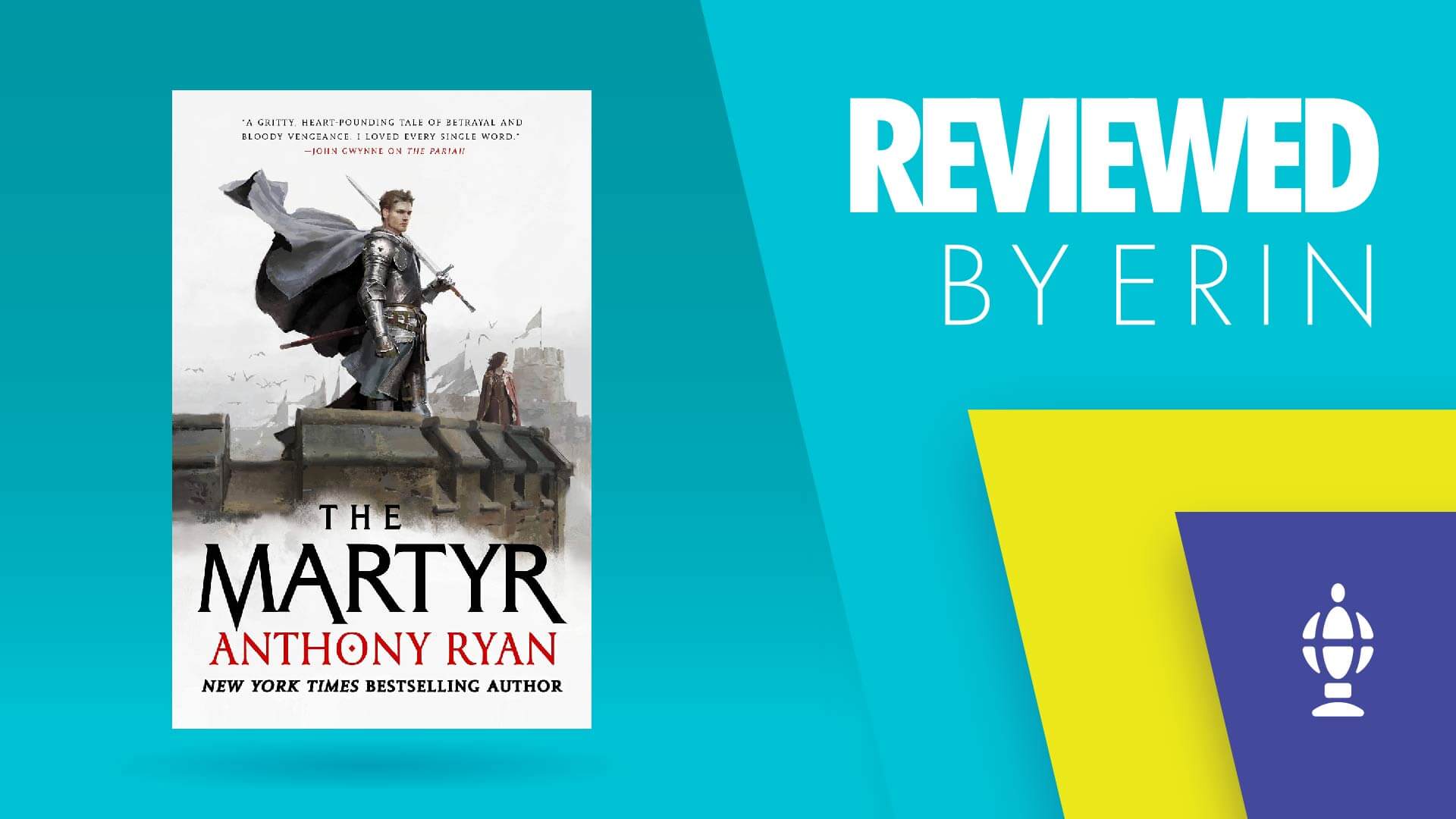 I received an ARC of The Martyr from Orbit Books in exchange for an honest review.

The second entry in Anthony Ryan’s Covenant of Steel series—some of the best low fantasy currently on the market—picks up where the first left off, with Alwyn Scribe in the service of Lady Evadine Courlain. The Martyr maintains much of what made The Pariah so good: Ryan’s rich and tactile prose, his compelling (and morally questionable) characters, and the bloody, brutal world they inhabit. But it also adopts a very different story structure, a choice which is beneficial in that it makes the book feel fresh…at the expense of stripping agency from Alwyn. One step forward, two steps back.

The prose here is still sharp, and it is in the moment-to-moment reading experience that The Martyr shines most brightly. Ryan scratches the George R.R. Martin itch in a way few other fantasy writers can—the world he has created is a down-and-dirty, rough-and-tumble sort of place where a bump on the head can be lethal, where magical remedies are hard to come by and always come with a cost. It’s great stuff. (One minor complaint: Ryan does have an annoying overreliance on the word “consented,” at least in the ARC I received.)

The cast of characters is another highlight. Although a fan favorite from The Pariah does not make an appearance here, there are plenty of fascinating fresh faces to be found, and those who do return from the previous book continue to develop different dimensions. Evadine herself, who drives most of the conflict but remains something of a cipher, is at least present for much of the novel, and I am most curious to find out where Ryan takes her in the third book.

I appreciated the structure of The Martyr, which bears almost no resemble to its predecessor. Gone is the episodic approach. Gone is the tight focus on a single character (this is still Alwyn’s first-person narrative, but here he takes a backseat in his own story; more on that in a moment). This is a bigger tale, not epic in scope but with more moving parts, and the action is no longer pushed forward by Alwyn—he is along for the ride, but he doesn’t have a lot of agency until circumstances change in the second half of the novel.

This was a significant disappointment for me. I am interested in active characters, characters who make choices, and that interest is amplified in single-POV first-person narratives. Alwyn’s lack of agency contributes to a mild case of middle-book syndrome. The structure of the novel is clean and precise, but it still feels incoherent in the most literal sense of the word. What is Alwyn’s arc? What is the theme? Did this novel do anything other than get me from The Pariah to The Traitor?

The first third or so of the book concerns the repair and defense of a ruined castle by Courlain’s company; that’s the extent of what I knew plot-wise going in, so I was pleased when that story concluded (which is fun, but feels mostly like a diversion that doesn’t sufficiently develop the characters proportionately to its pagecount) and the novel struck out into uncharted territory. The second half is more dynamic, surprising, and textured. But the ending—as in literally the last line—is comically bad, a dun-dun-dun payoff with no setup, and it falls flat because Ryan does not sufficiently establish the role fantastical elements play within the world he has created.

The Pariah was a striking opener to the Covenant of Steel series. Although The Martyr isn’t as immediately memorable and didn’t engender the same fondness for me, it remains an enjoyable continuation of the story, and I am still very much looking forward to The Traitor. Let’s end on a positive note: The Martyr is preceded by a delightful recap of The Pariah, and the summary is authored by an in-world character (similar to Fire & Blood’s Archmaester Gyldayn), which brought me an immense amount of joy in addition to creating tension and fleshing out the fictional history. Authors, take note: if you’re going to recap previous books in your series, do it in-world. It works wonders.