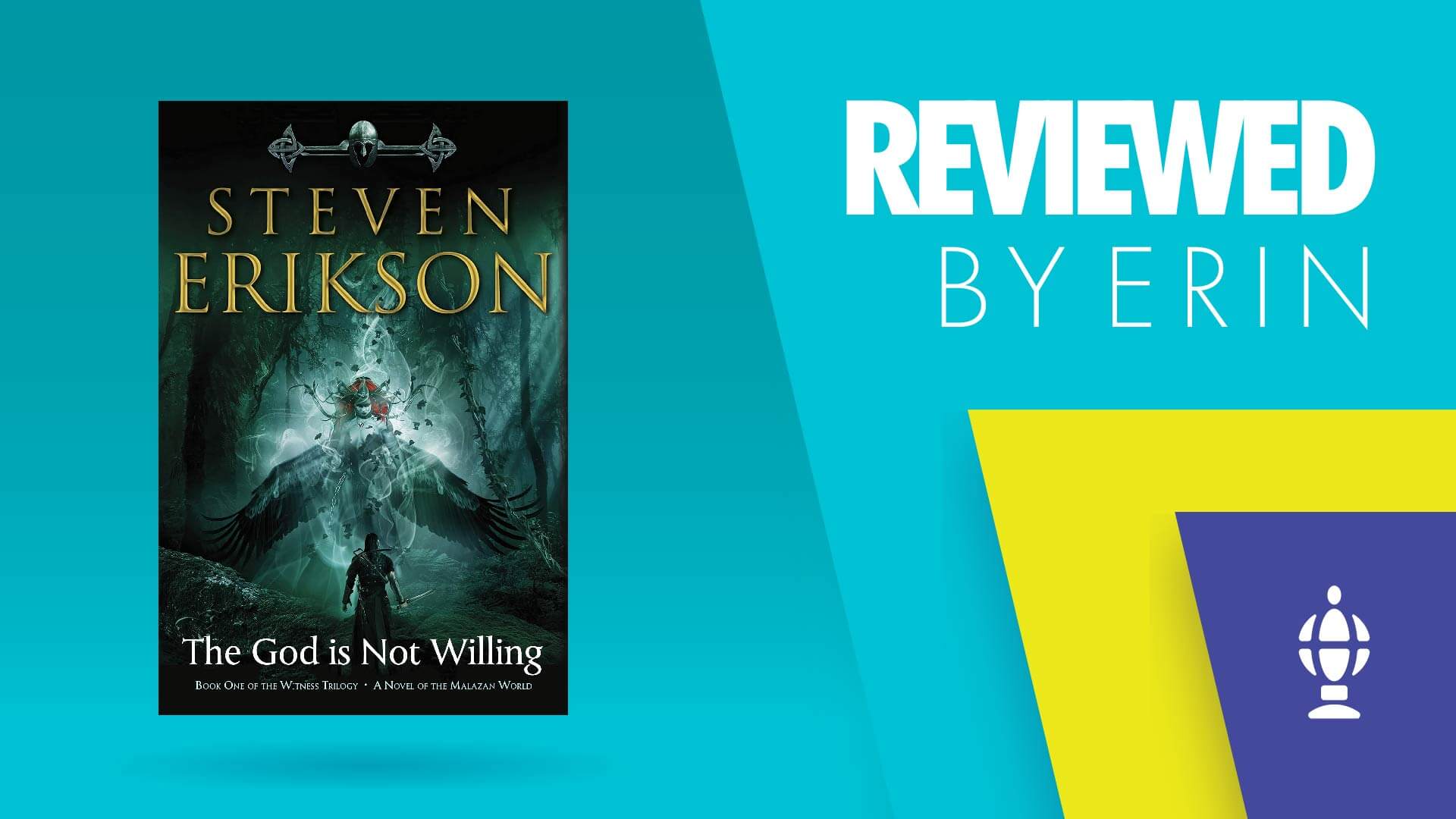 The God Is Not Willing

I received an ARC of The God Is Not Willing from Macmillan-Tor/Forge in exchange for an honest review.

Ten years after The Crippled God—both in real life and in the chronology of the Malazan world—Steven Erikson returns to the continent of Genabackis to reckon with the legacy of Karsa Orlong. If you know what those words mean, you’ve probably already read all ten volumes in Erikson’s The Malazan Book of the Fallen, have been anticipating The God Is Not Willing for years, and will pick it up regardless of what I say in this review (spoiler: it’s good, go read it).

If “Genabackis” and “Karsa Orlong” are gibberish to you, this is probably not the book you want to start with—that would be Gardens of the Moon, the first of the previously-mentioned ten volumes. Or…maybe not? I certainly can’t extricate myself from the knowledge I’ve gleaned from The Malazan Book of the Fallen, so take this with a grain of salt, but I believe The God Is Not Willing is a surprisingly-viable entry point to the Malazan world, which contains more than twenty books (with more on the way) from Erikson and Malazan co-creator Ian C. Esslemont.

The first difference you’ll likely notice between The God Is Not Willing and the rest of Erikson’s Malazan doorstoppers is that it’s, well, less of a doorstopper. Coming in at roughly half the length of the Book of the Fallen’s later volumes, The God Is Not Willing strikes a near-perfect balance between density/complexity and readability. Erikson maintains the slow-build structure that worked so well in the Book of the Fallen, but the condensed chapter lengths made for a more enjoyable reading experience because I didn’t have to block off an entire evening just to get from one chapter to the next. The God Is Not Willing is—dare I say a word which some in the Malazan fandom might find dirty?—“accessible,” and it doesn’t sacrifice depth to do so. Don’t worry! This is still what you expect from Erikson: layers upon layers of references, ambiguities, and philosophizing the fandom will be unpacking over many years and many re-reads.

You’ll be following two primary plot threads in The God Is Not Willing. One concerns the much-diminished Malazan presence on Genabackis—occasionally a familiar face will appear, but these are mostly fresh characters who took me a while to warm up to but ultimately won me over, with Anyx Fro and Stillwater being particular highlights. The “boots-on-the-ground” banter registers largely the same as it did in the Book of the Fallen, and its effectiveness will come down to personal taste: for some fans it will feel like hanging out with friends, for others it will feel like interminable padding. I felt more of the latter than the former in this case, but any lost goodwill was earned back by Erikson with the satisfying climatic sequence that rounds out this plotline.

The other plotline concerns Rant, a son of Karsa Orlong who was raped and abused by his mother under the influence of blood-oil. Rant almost instantly enters the pantheon of great Malazan characters—he spends most of The God Is Not Willing with a minor character from the Book of the Fallen, who returns for a beautiful and compelling arc, and his story engages some of the richest and most dynamic themes Erikson has ever tackled. There is a scene in which Rant and another character attempt to navigate his history of sexual trauma and the nature of abuse, consent, and addiction; it ranks, for me, among the most moving scenes in the Malazan world.

The Malazan books have always been intensely topical and intensely political, but Erikson turns that dial further than he ever has before (in this series) with The God Is Not Willing. The topics and politics in question here are refugees and the climate crisis. If I were to level a criticism at this book, it would be that it strays dangerously close to didacticism during certain sequences near the end—it’s not quite on par with the finger-wagging of his science fiction novel Rejoice, a Knife to the Heart, and I don’t disagree with anything Erikson asserts, but there were several scenes so close to breaking the fourth wall that I found myself figuratively rolling my eyes.

Confession: I hated The Crippled God. It stripped the Malazan series of the depth, the richness, and the subtlety of earlier entries—its treatment of trauma was cavalier, its villains were dull and simplistic, and its women were reduced to tropes that would have been frustrating even in a far more generic and far less progressive fantasy text. None of these problems are evident in The God Is Not Willing. This is a glorious return (I know the Kharkanas novels exist, don’t @ me; I’m referring to the chronology of the Malazan world) to the spiraling, sprawling moral, national, familial, and environmental complexity that characterized the Book of the Fallen prior to Dust of Dreams. If you’re already a fan of Erikson and the original ten volumes, The God Is Not Willing is a must-read—it got me excited about Malazan again, and it gets my highest recommendation.

But here is, perhaps, a more interesting question: Can you start your Malazan journey here? Should you?

The answer is a definitive…maybe. I would suggest trying Gardens of the Moon first—if it isn’t working for you but you’re still interested in the Malazan world, The God Is Not Willing may be a better entry point. There are heavy spoilers for previous books, yes, but they are presented mostly without context and with the veneer of mythology. References to the climatic sequences of Deadhouse Gates and House of Chains, which have perpetuated in the Malazan world via religious ceremony, brought me no end of delight; you will not pick up on the exact nature of these and other references if you haven’t read the relevant volumes from the Book of the Fallen, but you may find yourself intrigued enough to go back and find out.

When I was a child, I would often pick up later entries in fantasy series and read them with no knowledge of what had happened before, and I found a great deal of joy in devouring every hint of those happenings, piecing stories together as best I could through context clues. While reading The God Is Not Willing, I often found myself imagining what it would be like to start Malazan here, and it was surprisingly thrilling—I was entering a vast world shaped by titans who had taken their place in myth and legend, and I knew many thousands of pages awaited me if I wanted those myths demythologized and those legends brought to life. If that appeals to you as a first-time reader, you may find The God Is Not Willing to be a rewarding experience.