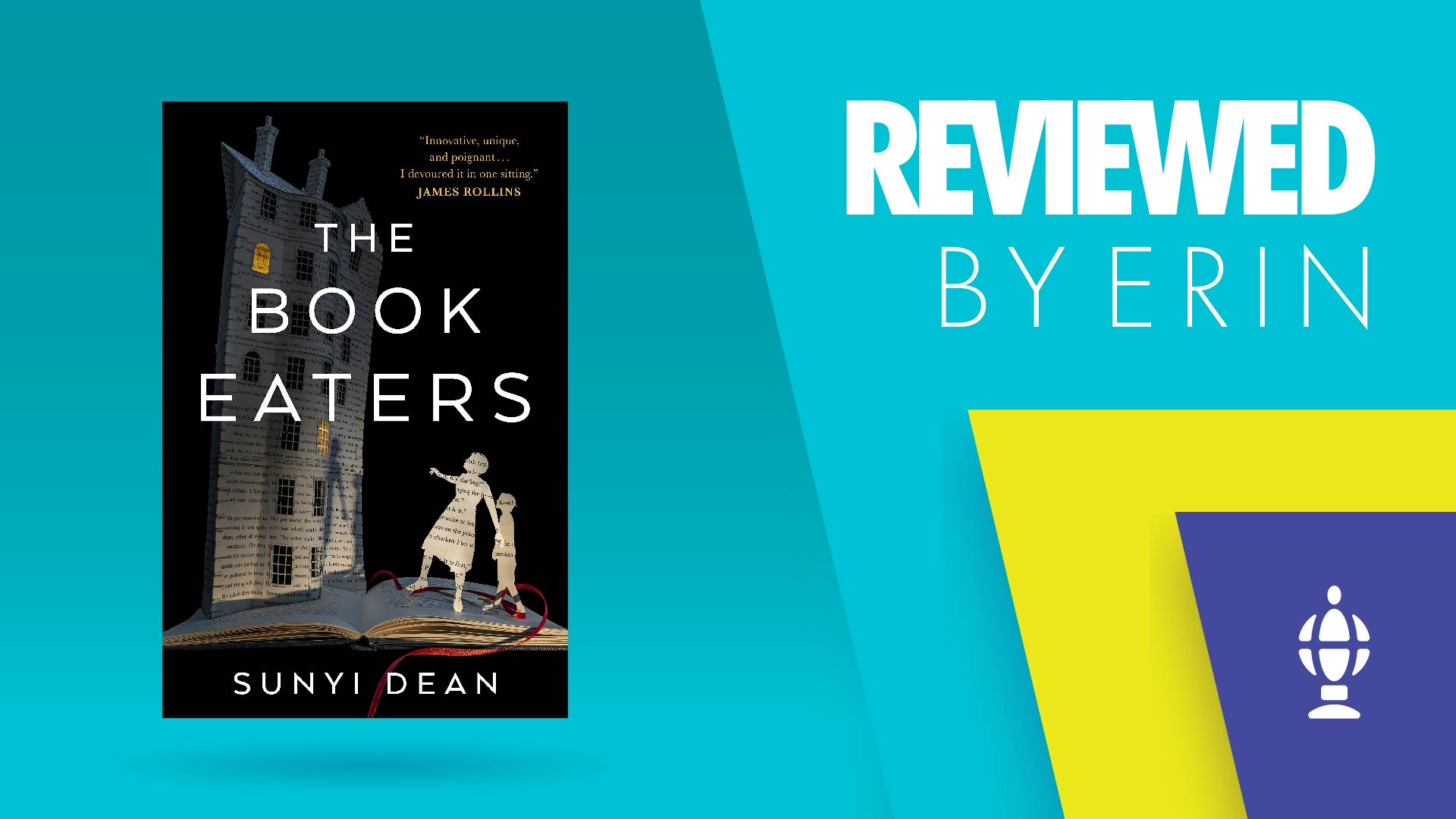 I received an ARC of The Book Eaters from Macmillan-Tor/Forge in exchange for an honest review.

The title of this book is not figurative or metaphorical: The Book Eaters is about a line of people in the UK who literally eat books, absorbing their contents and retaining their qualities. Boys are fed stories of heroism and adventure, girls are given fairy tales, and naughty children are forced to devour dry, dusty dictionaries. Protagonist Devon is on the run with her son, who is a more dangerous variation of a book eater—rather than literature, he must consume human minds to survive, and only a rival clan of book eaters can supply him with the drug he needs to suppress his hunger.

This premise is…very good. Eating books and acquiring their characteristics is the kind of idea that immediately opened thoroughfares in my imagination, and in addition to being very fun, it is primed for social commentary: how better to illustrate things like racism, misogyny, transphobia, or toxic masculinity than by making the process in which prejudices are absorbed literal? These topics are touched upon, but ultimately Dean seems much more interested in writing a thriller about motherhood filtered through a fresh take on vampires. She succeeds admirably at that. It’s just not what I wanted from this book, and not the best use of this delicious premise.

Dean has some fierce competition when it comes to books about mothers and motherhood. Recent releases such as Kaikeyi, Elsewhere, and The Push have set the bar very high, and the relationship between Devon and her son never resonated with me quite like the parent/child dynamics in those books. Her son’s hunger for human minds never quite clicked with me as a metaphor, either—I got the impression that Dean wanted to write about a fantastical version of a neuroatypical child, but the sheer destructiveness of that hunger (which I’m not convinced was necessary for the stakes of this story) complicates that metaphor with discomforting implications.

The plot works well enough. I was never bored; chapters bounce between past and present timelines, and this thankfully isn’t a case in which the book feels lopsided because one story is more interesting than the other. (I was maybe slightly more drawn to the past timeline because of its higher generosity with worldbuilding, and I was eager to learn more about that—including the insinuation that the book eaters are aliens, a detail which Dean wisely refuses to elaborate upon.) The slick, propulsive plotting feels like it would translate to film without much trouble, which may be a pro or a con depending on your reading preferences. It’s more of a con for me.

I have to admit that I was a bit confused by the inclusion of the mind eaters, not in terms of plot or worldbuilding logistics, but in terms of theme. The mind eaters are essentially vampires in all but name. If Dean wanted to write about vampires, why not write about vampires? Especially when this story also includes the much-more-interesting book eaters. It was them I really wanted to read about, and I found myself frustrated every time the story steered back (as it often did) to the mind eaters. There’s so much novelty here; I was puzzled as to why Dean left that novelty by the wayside in favor of something that, frankly, was far more generic.

The Book Eaters is perfectly fine. It’s an easy, enjoyable, well-written story with a killer premise. I just can’t shake the feeling that it was also something of a missed opportunity. I’m definitely interested in reading whatever Dean comes up with next, but a part of me hopes she returns to the world she constructed for The Book Eaters and digs a bit deeper—not necessarily into the mythology, but into the potential for social commentary baked into this premise.