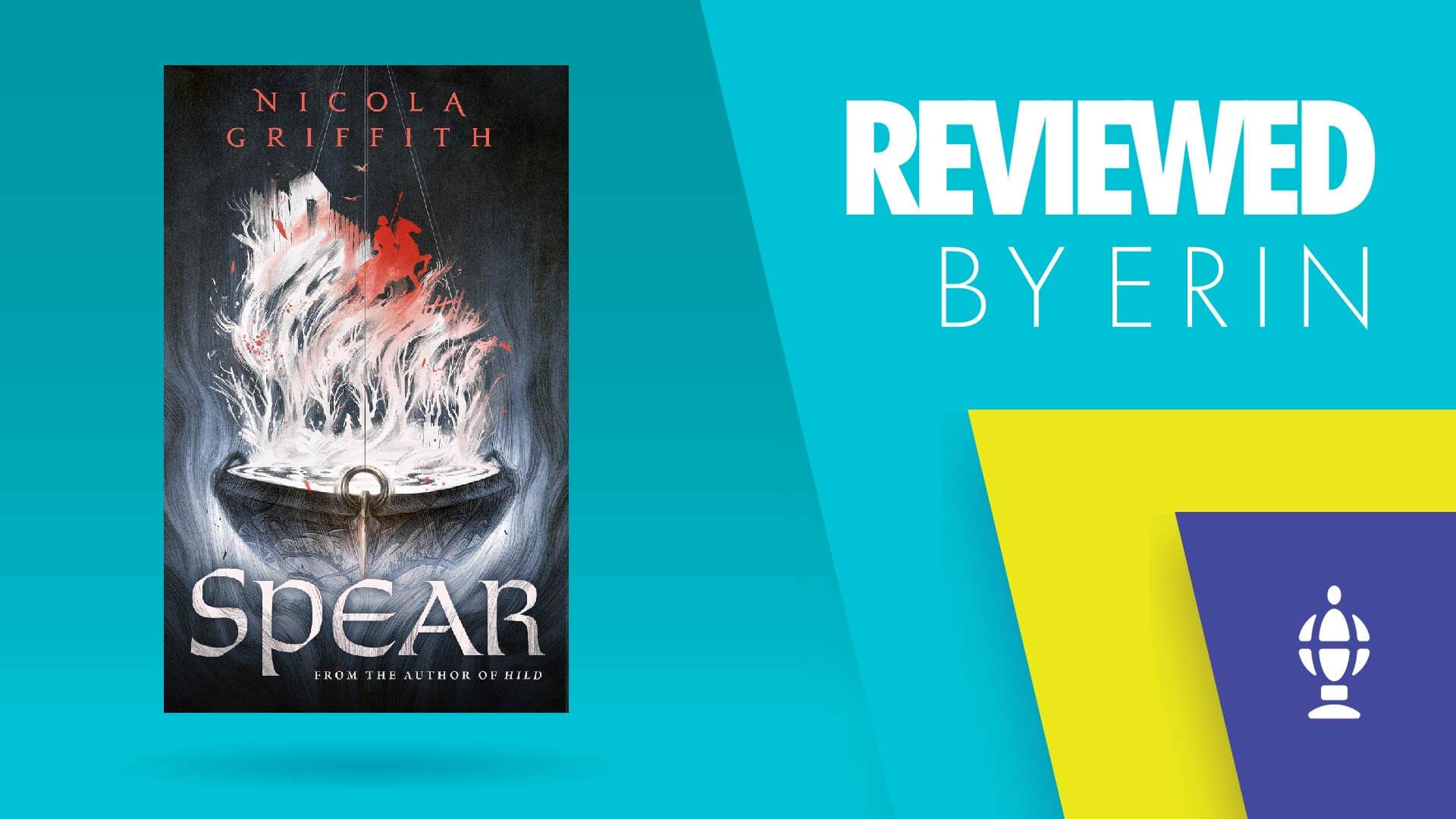 I received an ARC of Spear from Macmillan-Tor/Forge in exchange for an honest review.

It has been almost a decade since the publication of Nicola Griffith’s Hild (which I haven’t read—I know, I know!—despite having owned it for nearly that long), and while the sequel is still forthcoming, Spear serves as a self-contained fantasy interstitial for those awaiting Griffith’s next work of historical fiction, or as an introduction to her diverse oeuvre for newcomers such as myself. Spear lacks the emotional heft of a full novel but harbors its own pleasures.

Spear is a genderbent take on the story of Peretur (who you may know as Parzival or Percival) and the Holy Grail. Peretur grows up in the woods under the care of her mother, but she is a precocious and adventurous child who pokes and prods at the boundaries of her world. These early sections are where the novella is at its most engaging: Griffith’s prose is syntactically dense and peppered with proper nouns, which forced me to re-read many sentences multiple times before I could fully parse them. I savored the richness and texture of that experience.

Peretur’s initial encounters with people other than her mother are invigorating—she watches them from the woods, and she becomes a sort of forest spirit in their minds when she starts stealing their possessions and leaving other items for them to find. I was particularly struck by the moment she first observes male-bodied people and the way she attempts to describe them, having no reference point for the human body other than herself and her mother. She becomes attracted to both men and women as she gets older, and because she lives in a cultural vacuum, her bisexuality is utterly unmoored from shame or confusion. It’s extraordinarily refreshing.

Sexuality becomes even more dynamic in Spear when Peretur begins passing as male and her story starts intersecting with that of King Arthur and his court. The “female-bodied person passes as male-bodied person in a patriarchal environment” trope never ceases to engage me—likely because it empowers the text to obliquely address the fluidity of gender as a theme. Spear is deliciously playful at every turn, highlighting the arbitrary nature of the societal constructs that surround gender and sexuality via a character who did not grow up enmeshed in those constructs.

Griffith’s portrayals of other Arthurian characters are equally refreshing. King Arthur himself (“Artos”), although he exists only on the fringes of this story, is given a tantalizingly different depiction: he seems to be on a spectrum somewhere between Frodo and Gollum, enthralled by a magical artifact—his sword, in this case—but not wholly consumed or corrupted by it. It’s less fantastical than it is patriarchal, portraying a man desperately clinging to power and privilege even as he feels the tremors of change begin to destabilize the ground under his feet.

Spear starts to flow more smoothly as it moves away from its opening sections and Peretur interacts with more characters, but it unravels near the end. The pacing accelerates to the point that major plot beats breeze by weightlessly; I suddenly found myself struggling to stay invested, and I craved either a full novel or a story that was smaller in scope—a longer book that would allow Peretur’s relationships to develop naturally over time, or a shorter book that would be content to step away earlier in her journey. Instead, it lands in an awkward middle ground.

Despite this frustration, Spear was, for me, a sumptuous and electrifying introduction to Griffith. I can’t wait to read more from her.