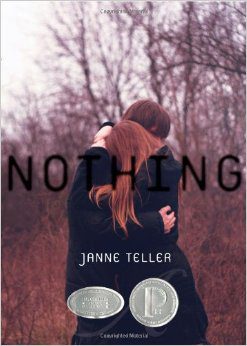 “The Earth is four billion, six hundred million years old, and you’re going to reach one hundred at the most! It’s not even worth the bother.”

So declares Pierre Anthon, a Danish seventh-grader who realizes one day that nothing matters. He states this revelation to his classmates, departs the school, and takes up residence in a nearby plum tree (from which he pelts his fellow students with plums on their way to and from class).

He can’t be right, can he? Something must matter. Narrator Agnes and the rest of Pierre Anthon’s peers certainly think so—and yet, they can’t shake that shred of doubt. What if, despite everything they have been told, despite everything they would like to believe, nothing truly matters? They are just old enough to be scared of the question, just young enough not to have an answer.

They decide to prove him wrong the only way they know how: by taking the things that matter most to them and stacking them in an abandoned sawmill. The “heap of meaning,” they call it—that’ll show him! But their project quickly spirals out of control; the students try to one-up each other by demanding increasingly-valuable items, turning an honest mission into a dangerous game of personal vengeance.

Nothing deftly slips between a first-person singular narration (which most readers of YA will be accustomed to) and a first-person plural narration reminiscent of Jeffrey Eugenides’ The Virgin Suicides, a book with which Teller’s novel has much in common. Brief bursts of characterization flare from an otherwise unremarkable group of seventh-graders; they are, quite pointedly, defined by what they lose.

By focusing on the drama between the children, Nothing allows its themes to simmer under the surface of the story without losing the thrust and momentum of the plot. Everything watersheds down to one ineffable word: “meaning.” Is it inherent? Is it imbued? Can it be sold? Lost? Taken? Destroyed? The search for answers will cost these students dearly, and in the end it may all be for nothing. Pierre Anthon, meanwhile, is laughing in his plum tree.

Janne Teller’s nihilistic novel is uncomplicated by philosophical standards, but its disturbing implications will resonate with both teenagers and older readers. Clocking in at a mere two hundred and twenty-seven pages, Nothing is a splash of cold literary water—a chilling and unforgettable look into human depravity and our desperate search for meaning in a meaningless world. This is not a book to be missed.

Additional reading:
Although Nothing is first and foremost a good story, it also serves as an introduction to existential philosophy. For those who wish to delve deeper into the topic, I recommend starting with Jean-Paul Sartre’s Existentialism is a Humanism, moving on to Albert Camus’ The Myth of Sisyphus, and eventually to Sartre’s major nonfiction opus, Being and Nothingness.