Click on an image below to enlarge and scroll. Text only version of infographics below. 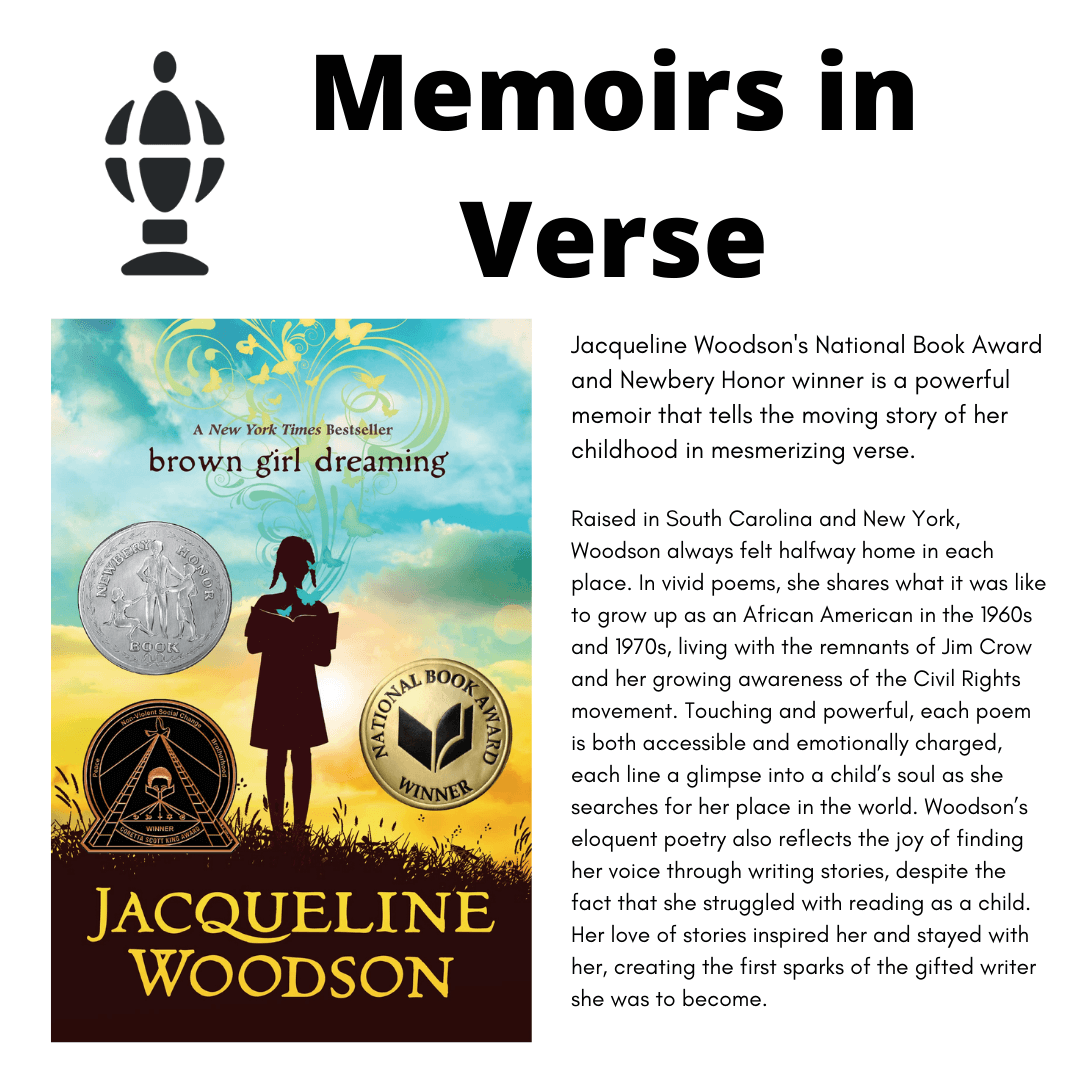 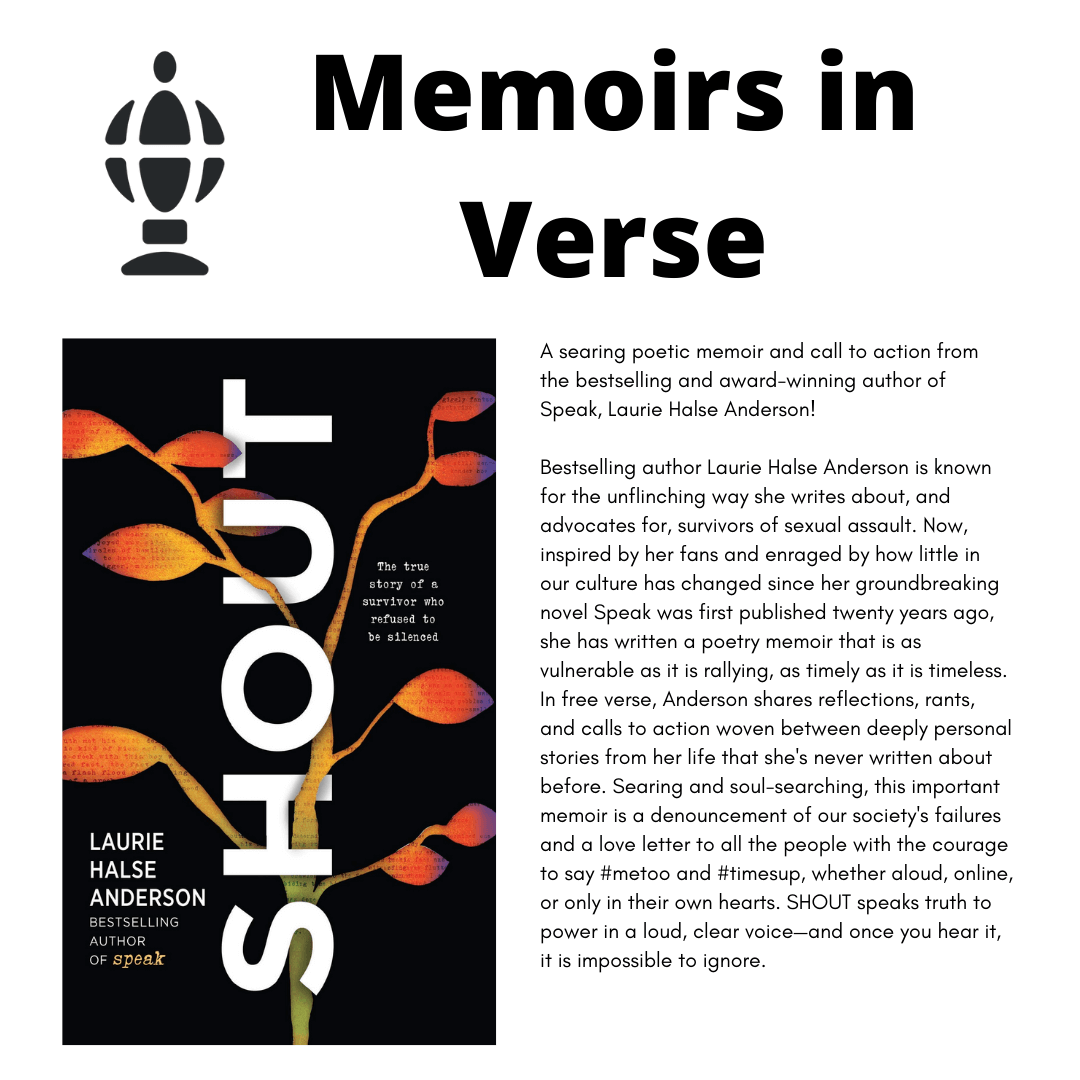 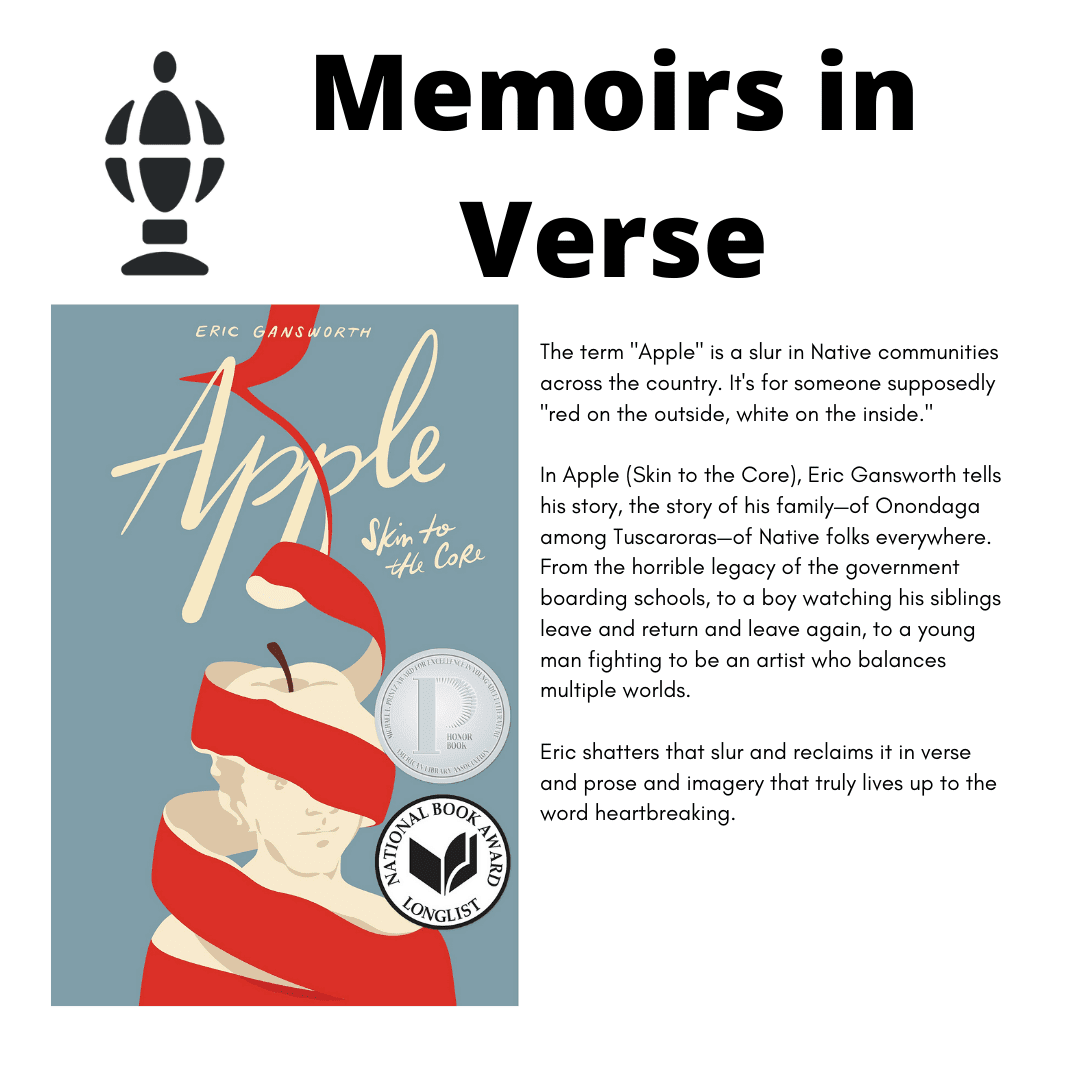 Brown Girl Dreaming
Jacqueline Woodson's National Book Award and Newbery Honor winner is a powerful memoir that tells the moving story of her childhood in mesmerizing verse.
Raised in South Carolina and New York, Woodson always felt halfway home in each place. In vivid poems, she shares what it was like to grow up as an African American in the 1960s and 1970s, living with the remnants of Jim Crow and her growing awareness of the Civil Rights movement. Touching and powerful, each poem is both accessible and emotionally charged, each line a glimpse into a child’s soul as she searches for her place in the world. Woodson’s eloquent poetry also reflects the joy of finding her voice through writing stories, despite the fact that she struggled with reading as a child. Her love of stories inspired her and stayed with her, creating the first sparks of the gifted writer she was to become.
Shout
A searing poetic memoir and call to action from the bestselling and award-winning author of Speak, Laurie Halse Anderson!
Bestselling author Laurie Halse Anderson is known for the unflinching way she writes about, and advocates for, survivors of sexual assault. Now, inspired by her fans and enraged by how little in our culture has changed since her groundbreaking novel Speak was first published twenty years ago, she has written a poetry memoir that is as vulnerable as it is rallying, as timely as it is timeless. In free verse, Anderson shares reflections, rants, and calls to action woven between deeply personal stories from her life that she's never written about before. Searing and soul-searching, this important memoir is a denouncement of our society's failures and a love letter to all the people with the courage to say #metoo and #timesup, whether aloud, online, or only in their own hearts. SHOUT speaks truth to power in a loud, clear voice—and once you hear it, it is impossible to ignore.
The term "Apple" is a slur in Native communities across the country. It's for someone supposedly "red on the outside, white on the inside."
Apple (Skin to the Core)
In Apple (Skin to the Core), Eric Gansworth tells his story, the story of his family—of Onondaga among Tuscaroras—of Native folks everywhere. From the horrible legacy of the government boarding schools, to a boy watching his siblings leave and return and leave again, to a young man fighting to be an artist who balances multiple worlds.
Eric shatters that slur and reclaims it in verse and prose and imagery that truly lives up to the word heartbreaking.