Happy Earth Day! This YA Friday we're celebrating by highlighting Earthy reads for all kinds of readers--from historical mysteries, to epic fantasies, to stories of survival we've got you covered.

Click on an image below to enlarge and scroll. Text versions below images. 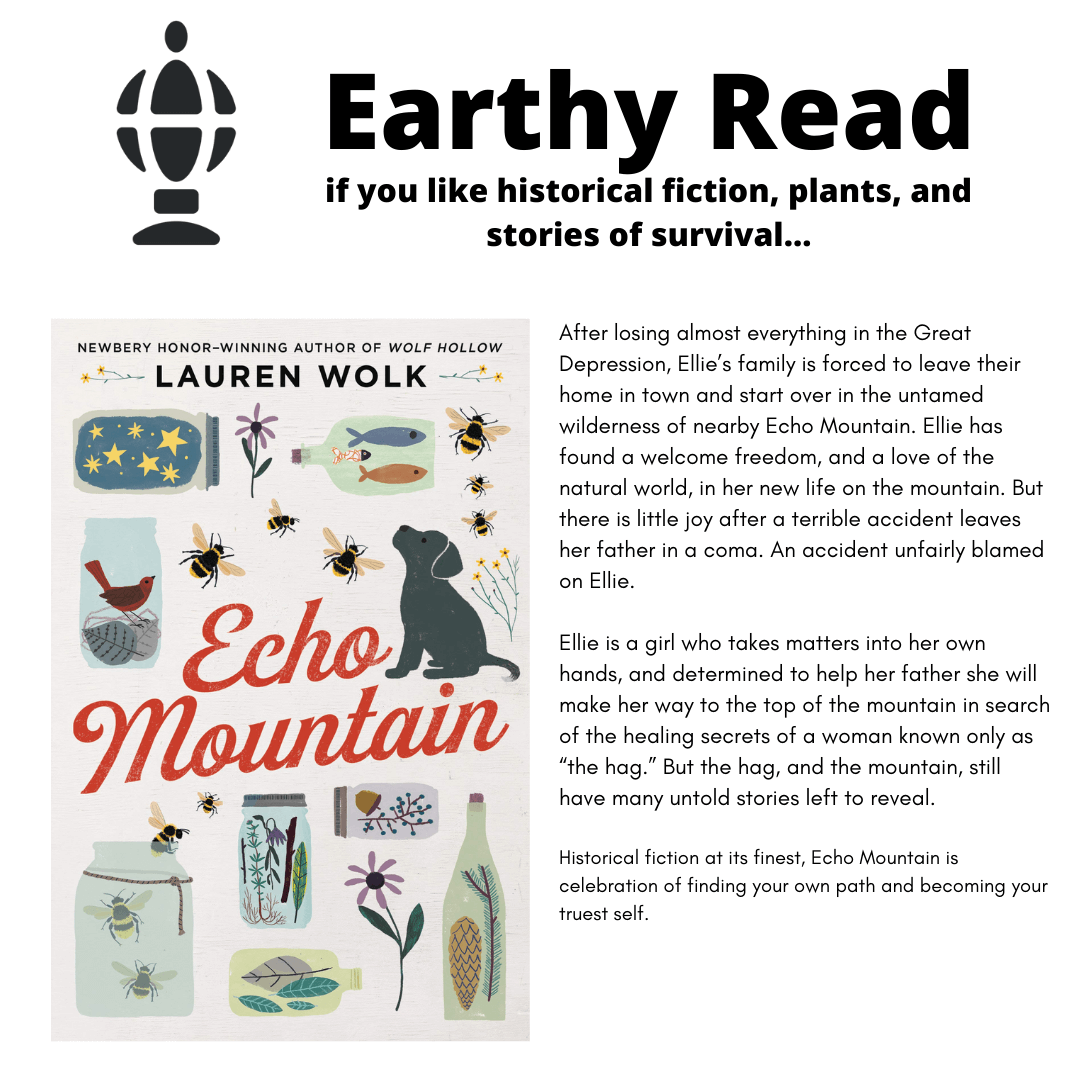 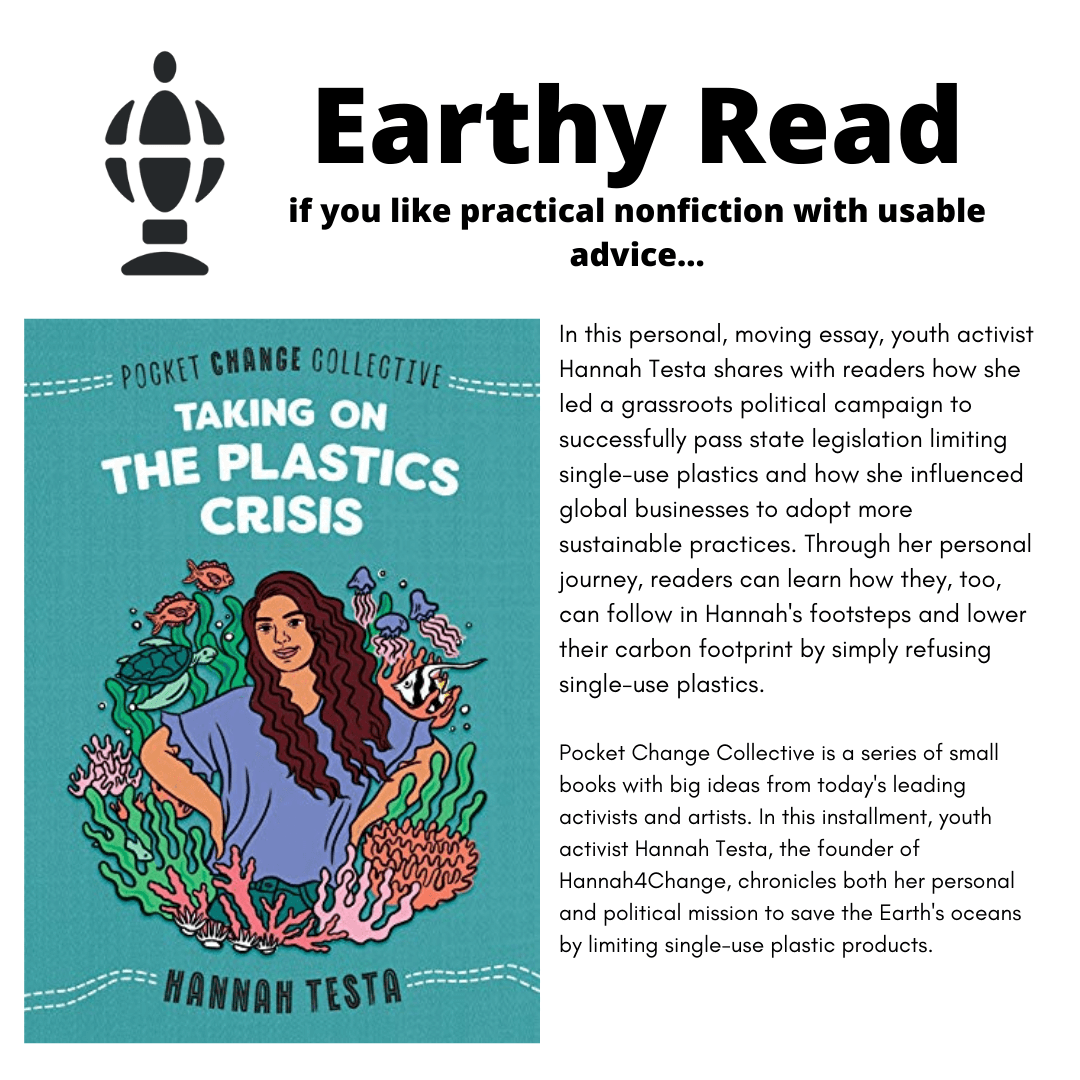 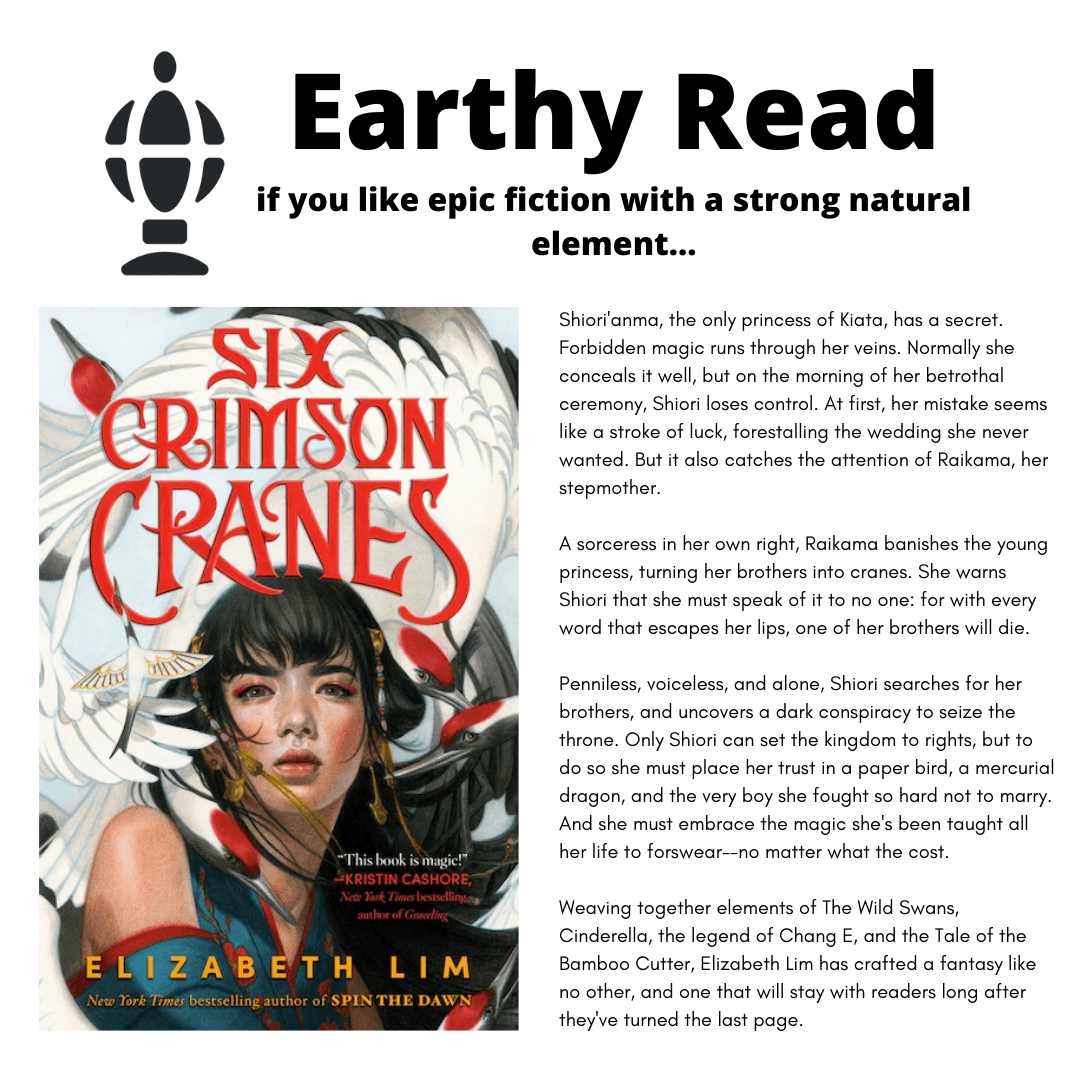 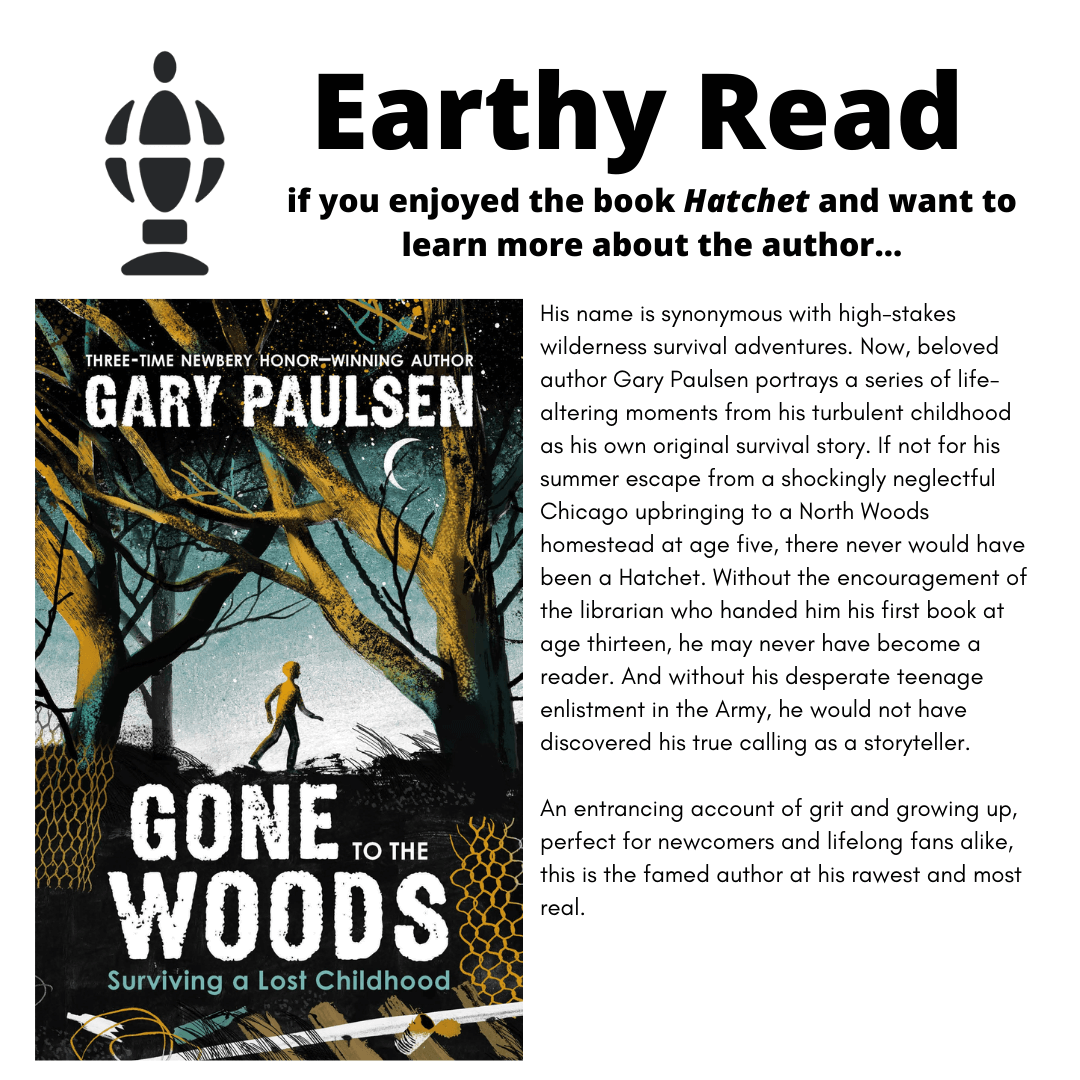 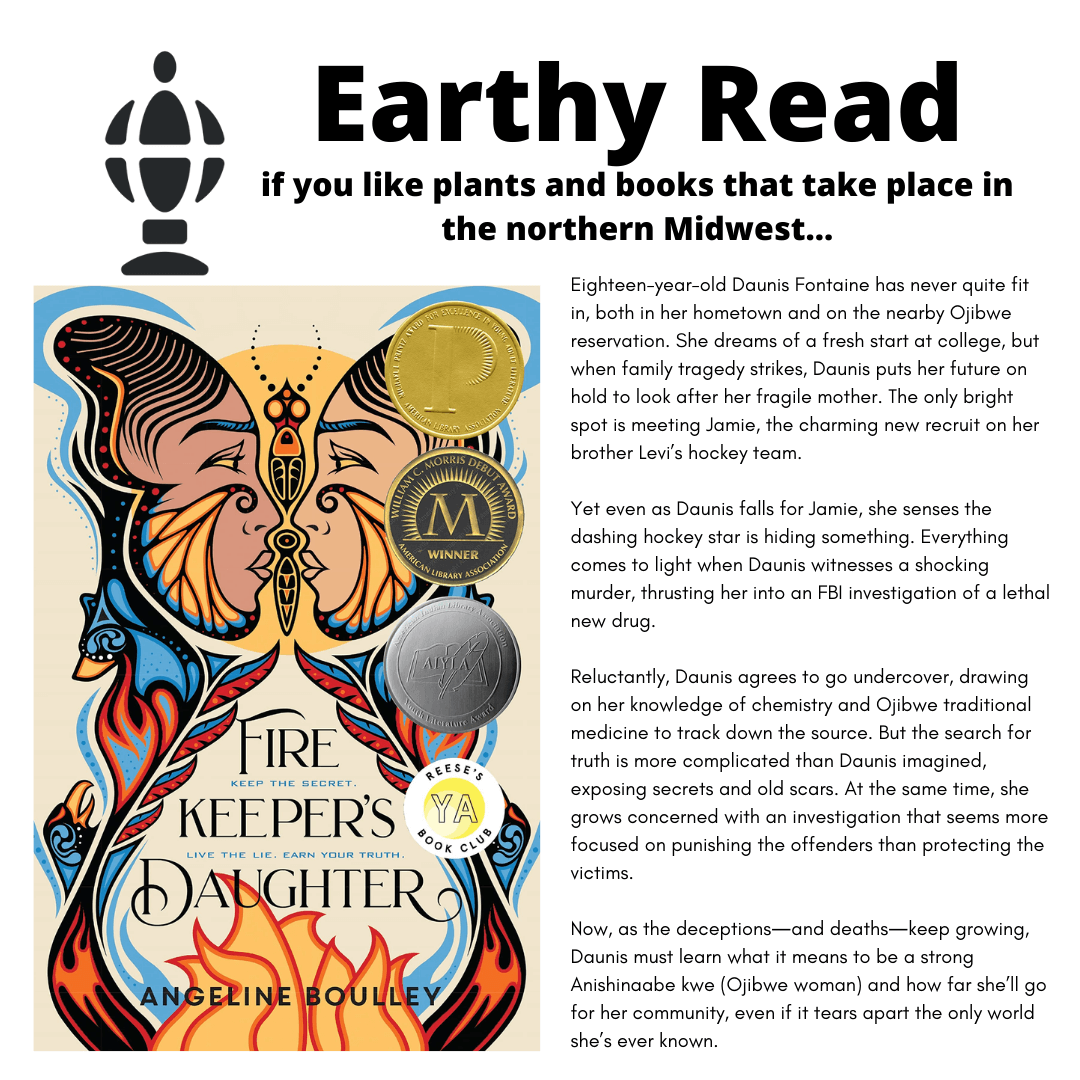 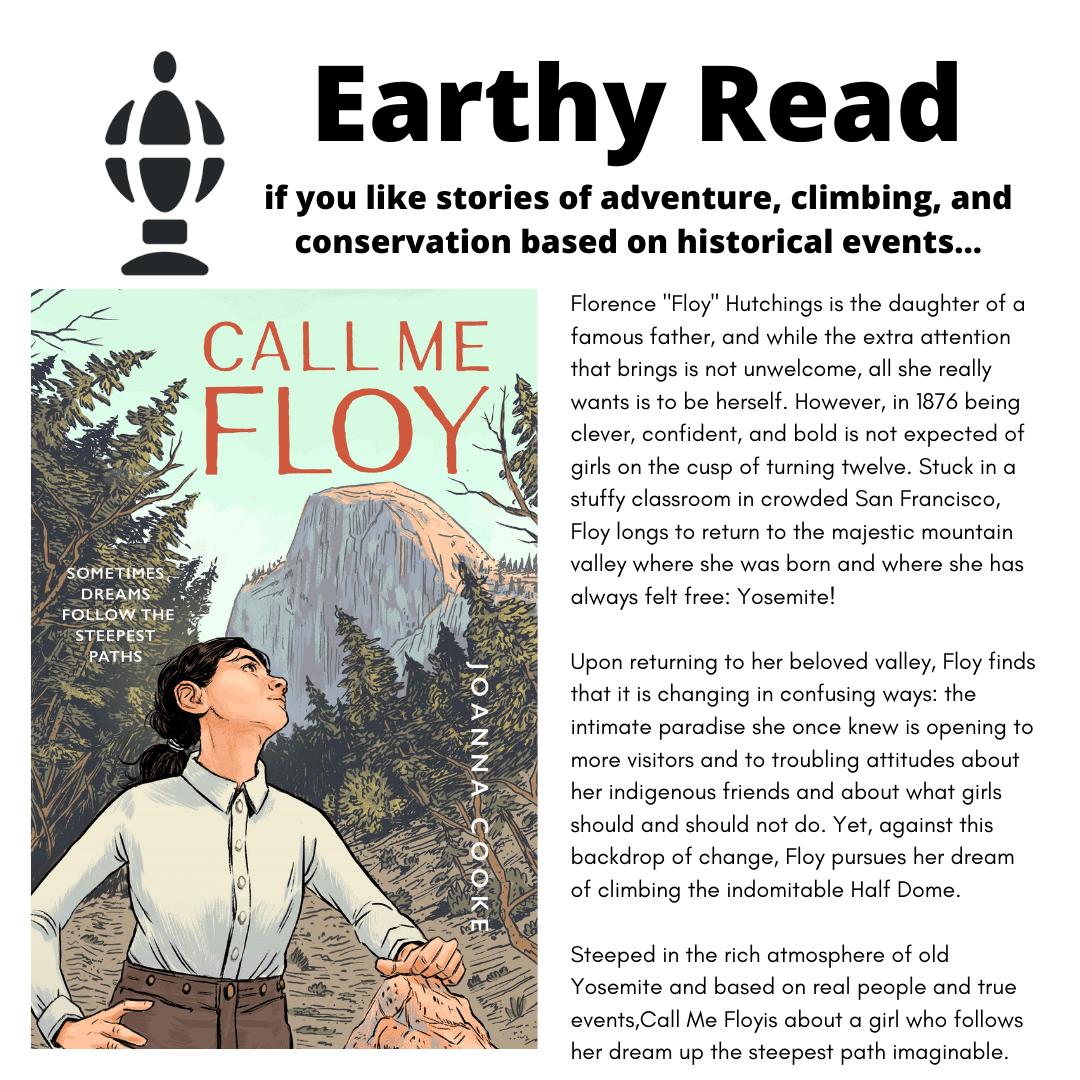 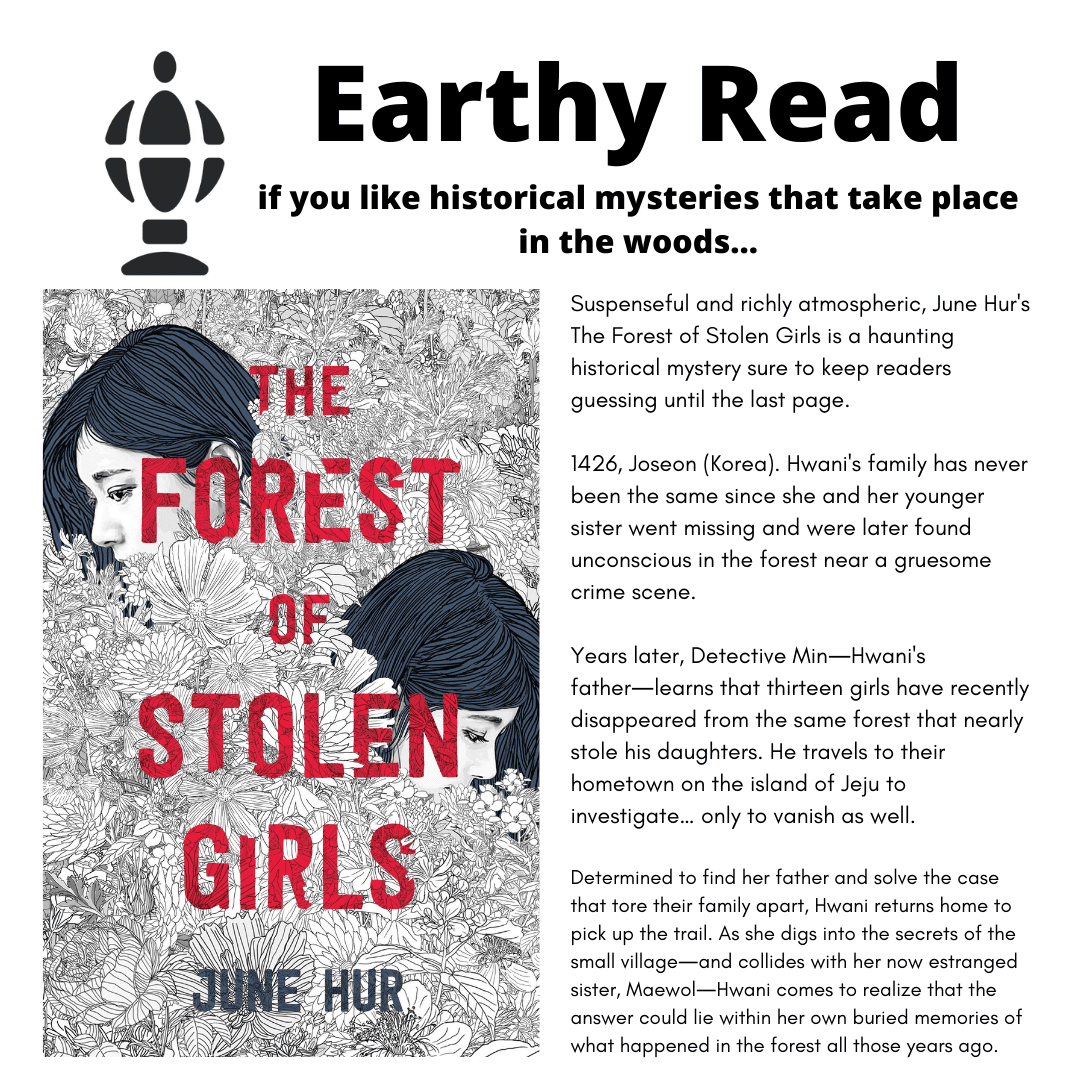 if you like historical fiction, plants, and stories of survival...Echo Mountain

After losing almost everything in the Great Depression, Ellie’s family is forced to leave their home in town and start over in the untamed wilderness of nearby Echo Mountain. Ellie has found a welcome freedom, and a love of the natural world, in her new life on the mountain. But there is little joy after a terrible accident leaves her father in a coma. An accident unfairly blamed on Ellie.

Ellie is a girl who takes matters into her own hands, and determined to help her father she will make her way to the top of the mountain in search of the healing secrets of a woman known only as “the hag.” But the hag, and the mountain, still have many untold stories left to reveal.
Historical fiction at its finest, Echo Mountain is celebration of finding your own path and becoming your truest self.

if you like practical nonfiction with usable advice...Taking on the Plastics Crisis In this personal, moving essay, youth activist Hannah Testa shares with readers how she led a grassroots political campaign to successfully pass state legislation limiting single-use plastics and how she influenced global businesses to adopt more sustainable practices. Through her personal journey, readers can learn how they, too, can follow in Hannah's footsteps and lower their carbon footprint by simply refusing single-use plastics.
Pocket Change Collective is a series of small books with big ideas from today's leading activists and artists. In this installment, youth activist Hannah Testa, the founder of Hannah4Change, chronicles both her personal and political mission to save the Earth's oceans by limiting single-use plastic products.
if you like epic fiction with a strong natural element...Six Crimson Cranes Shiori'anma, the only princess of Kiata, has a secret. Forbidden magic runs through her veins. Normally she conceals it well, but on the morning of her betrothal ceremony, Shiori loses control. At first, her mistake seems like a stroke of luck, forestalling the wedding she never wanted. But it also catches the attention of Raikama, her stepmother.
A sorceress in her own right, Raikama banishes the young princess, turning her brothers into cranes. She warns Shiori that she must speak of it to no one: for with every word that escapes her lips, one of her brothers will die.
Penniless, voiceless, and alone, Shiori searches for her brothers, and uncovers a dark conspiracy to seize the throne. Only Shiori can set the kingdom to rights, but to do so she must place her trust in a paper bird, a mercurial dragon, and the very boy she fought so hard not to marry. And she must embrace the magic she's been taught all her life to forswear--no matter what the cost.
Weaving together elements of The Wild Swans, Cinderella, the legend of Chang E, and the Tale of the Bamboo Cutter, Elizabeth Lim has crafted a fantasy like no other, and one that will stay with readers long after they've turned the last page.

if you enjoyed the book Hatchet and want to learn more about the author...Gone to the Woods

His name is synonymous with high-stakes wilderness survival adventures. Now, beloved author Gary Paulsen portrays a series of life-altering moments from his turbulent childhood as his own original survival story. If not for his summer escape from a shockingly neglectful Chicago upbringing to a North Woods homestead at age five, there never would have been a Hatchet. Without the encouragement of the librarian who handed him his first book at age thirteen, he may never have become a reader. And without his desperate teenage enlistment in the Army, he would not have discovered his true calling as a storyteller.

An entrancing account of grit and growing up, perfect for newcomers and lifelong fans alike, this is the famed author at his rawest and most real.

if you like plants and books that take place in the northern Midwest...Firekeepers Daughter

Eighteen-year-old Daunis Fontaine has never quite fit in, both in her hometown and on the nearby Ojibwe reservation. She dreams of a fresh start at college, but when family tragedy strikes, Daunis puts her future on hold to look after her fragile mother. The only bright spot is meeting Jamie, the charming new recruit on her brother Levi’s hockey team.

Yet even as Daunis falls for Jamie, she senses the dashing hockey star is hiding something. Everything comes to light when Daunis witnesses a shocking murder, thrusting her into an FBI investigation of a lethal new drug.
Reluctantly, Daunis agrees to go undercover, drawing on her knowledge of chemistry and Ojibwe traditional medicine to track down the source. But the search for truth is more complicated than Daunis imagined, exposing secrets and old scars. At the same time, she grows concerned with an investigation that seems more focused on punishing the offenders than protecting the victims.
Now, as the deceptions―and deaths―keep growing, Daunis must learn what it means to be a strong Anishinaabe kwe (Ojibwe woman) and how far she’ll go for her community, even if it tears apart the only world she’s ever known.

if you like stories of adventure, climbing, and conservation based on historical events...Call me Floy

Florence "Floy" Hutchings is the daughter of a famous father, and while the extra attention that brings is not unwelcome, all she really wants is to be herself. However, in 1876 being clever, confident, and bold is not expected of girls on the cusp of turning twelve. Stuck in a stuffy classroom in crowded San Francisco, Floy longs to return to the majestic mountain valley where she was born and where she has always felt free: Yosemite!
Upon returning to her beloved valley, Floy finds that it is changing in confusing ways: the intimate paradise she once knew is opening to more visitors and to troubling attitudes about her indigenous friends and about what girls should and should not do. Yet, against this backdrop of change, Floy pursues her dream of climbing the indomitable Half Dome.
Steeped in the rich atmosphere of old Yosemite and based on real people and true events,Call Me Floyis about a girl who follows her dream up the steepest path imaginable.
if you like historical mysteries that take place in the woods...The Forest of Stolen
Girls

Suspenseful and richly atmospheric, June Hur's The Forest of Stolen Girls is a haunting historical mystery sure to keep readers guessing until the last page.
1426, Joseon (Korea). Hwani's family has never been the same since she and her younger sister went missing and were later found unconscious in the forest near a gruesome crime scene.
Years later, Detective Min―Hwani's father―learns that thirteen girls have recently disappeared from the same forest that nearly stole his daughters. He travels to their hometown on the island of Jeju to investigate… only to vanish as well.
Determined to find her father and solve the case that tore their family apart, Hwani returns home to pick up the trail. As she digs into the secrets of the small village―and collides with her now estranged sister, Maewol―Hwani comes to realize that the answer could lie within her own buried memories of what happened in the forest all those years ago.

if you like stories about finding food, hunting, and building shelter alone in the wilderness...I am still alive

After: Jess is alone. Her cabin has burned to the ground. She knows if she doesn’t act fast, the cold will kill her before she has time to worry about food. But she is still alive—for now.

Before: Jess hadn’t seen her survivalist, off-the-grid dad in over a decade. But after a car crash killed her mother and left her injured, she was forced to move to his cabin in the remote Canadian wilderness. Just as Jess was beginning to get to know him, a secret from his past paid them a visit, leaving her father dead and Jess stranded.
After: With only her father’s dog for company, Jess must forage and hunt for food, build shelter, and keep herself warm. Some days it feels like the wild is out to destroy her, but she’s stronger than she ever imagined.